The prelude to the Barum rally will take place in Žlutava

The racing cars will be roaring at the Barum Czech Rally Zlín even before the ceremonial start. On Friday 26 August, as in previous years, there will be a qualifying session in the morning, followed by a shakedown. The organisers have chosen a well-known 4.57 km long track near the village of Žlutava, which was part of the Halenkovice stage in previous years. 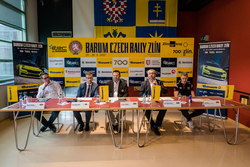 The qualifying test has its origins in the gravel rallies within the European Rally Championship (ERC) series, and becoming part of all European Rally Championship events since 2014. From this year on, only ERC1-registered drivers, which are crews with Rally2 (better known as R5) cars, have been running free practice and the qualifying test. Everyone else is restricted to the classic shakedown. The results of the qualification are used to select the starting order of the drivers for the first leg. "This year there was a new modification where not only the top 15 from the qualification choose the starting order, but also drivers who did not fit into the top 15 but were on the list published by the sports commissioners before the start of the qualifying test can join them. This rule will allow even those drivers who failed the qualifying test to start relatively at the front," said Ing. Petr Linhart, Deputy Director of Barum Czech Rally Zlín. Behind the group of drivers choosing the starting order, the remaining drivers with Rally2 cars will start according to the results of the qualification. All others will then start according to their assigned starting numbers. "There has also been a change in the starting order for the second leg. The first fifteen are now rotated according to the results of the first leg, but the new promoter has the possibility to intervene in this order at his own decision," Linhart specified.

The crews will have the opportunity to make two passes through the free practice section from 7:30 to 9 a.m., and the measured times from these two drives will not be evaluated. The third run, scheduled from 9:10am to 9:55am, will be the decisive run for the crews. The crews will start there according to the pre-published order. An interesting feature of the qualifying test is that unlike conventional stages, it is measured to milliseconds. The results of the third run will be crucial for the selection of the starting order, which will take place from 15:30 at the starting ramp in front of the Zlín City Hall. The driver who has the fastest time in the qualifying test has the right to choose first. After the qualification, a trial SS will be held in Žlutava from 10 a.m. to 1 p.m. The service zone will be located at the Continental Barum spol. s r.o. testing track in Otrokovice. Service outside the service zone is prohibited.

The qualifying track, meaning the trial SS, will take place on a familiar circuit. The start is situated on a local curved road behind the Bělov weir and runs along the Morava River for several hundred metres. Then the section climbs through a technical section and a steep rise up the hill. After a left turn by the football field, there is a clear passage by the former motocross track. From here, the route descends gently to the village of Žlutava, where there is a natural buffer around a small island. The track then continues through a fast section and a difficult switchback to the finish in front of the village of Bělov. More information available at www.czechrally.com and don't forget to follow Barum rally on the official Facebook, Instagram and Twitter accounts.