The Barum Czech Rally Zlín has for many years not only been important in terms of sporting significance as part of the FIA European Rally Championship, but also in terms of economic importance for the Czech Republic itself. Thanks to the exceptional spectator attendance, tens of thousands of fans, precisely 55,000 unique and 250,000 cumulative visitors from all over the world, coming to Zlín every year. Thanks to this attendance, the Barum rally is a very important positive boost to tourism, generating tens of millions of crowns to the regional economy and public budgets, just like other major sport events in the Czech Republic. 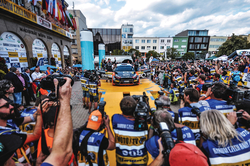 The biggest change came in 2007, when Barum Czech Rally Zlín came under the promoter, which was the world-famous Eurosport. Of course, there is no promoter like a promoter, just as there is no sport like a sport. In this case, the Barum Czech Rally Zlín suddenly enjoyed extreme media attention, thanks to the promoter, who broadcasted the Zlín event around the world, mainly thanks to shots on a very popular sports channel. At the same time, the popularity of the FIA European Rally Championship and the Barum rally as such was also growing thanks to the increasing media coverage, with more and more crews, guests, officials and especially visitors coming to Zlín not only from the Czech Republic but also from abroad. It should be noted that without this event, foreign visitors would not come to Zlín at all and the country's economy would be deprived of significant income.
This year there is a change, and a very significant one. The promoter of the FIA European Rally Championship, WRC Promoter GmbH, which is part of Redbull Media House, has changed. The whole event will get a brand new blood in its veins, as all stages will be livestreamed for all three days on all media platforms around the world. Never in the history of the event has this project ever been held on the territory of the Czech Republic and we will see what effect it will have on the overall popularity of the rally.
The promoter named above is no newcomer to event sponsorship, as he is in his ninth season as a promoter for the WRC. It's very satisfying to find that even though the entire rally is livestreamed, this fact still doesn't affect the attendance of the events, in fact, it's quite the opposite. Let's face it, watching a rally on the spot is a much greater experience, and it's bringing rallysport into the media spotlight which gives regular people a chance to learn more about this attractive sport and draw them to visit the event.
Let's take a look at the promoter from the other side, whether it was Eurosport before and now WRC Promoter GmbH. Yes, it brings a lot and of course it costs something to be a part of that project, and often it is not easy to meet the budget. Major sporting events, even though cost more money, are very important for the country's economy. Žijeme složitou dobu, kdy jsme stále v covidové době, v době války na Ukrajině a době inflační i energetické. Rozumíme tomu, že se v této náročné době musí šetřit, sami to vidíme i u nás. Na druhé straně, právě významné sportovní akce přinášejí útratou návštěvníků mnohonásobně vyšší prostředky do ekonomiky státu, než sami od státu, města a obcí potřebují.
Tourism is an innovative and highly efficient industry, but unfortunately in the Czech Republic it is very underestimated. Institutionally and systemically, this sector of the economy is not meaningfully supported. We could also find many systemic errors in the sport management. Yet tourism brings about 600 billion to the national economy through multiplier effects, which represents 6% of GDP (2019). Sport is also a significant contributor to the country's economy - total revenues in multiplier terms are about 340 billion (2019) of Czech crowns. Together, these two areas then enrich public budgets by about CZK 200 billion per year (2019).

In case of the Barum Czech Rally Zlín, this is so-called sports tourism, where visitors come to Zlín, the Zlín Region and the Czech Republic just for this sport event. So far, several interesting studies have been prepared on the economic benefits of this event (e.g. Tomas Bata University, Institute of Tourism, CE-Traffic). The following is a summary of the facts and information on the impact of the event as calculated and summarised by Economic impacT v.o.s. in their comprehensive study.

- the number of cumulative visitors was 251,000, counting the individual locations, stages, service zone, start and finish. More importantly, the number of unique visitors was 55,000, with 64% from the Zlín region, 25% from other regions of the Czech Republic and 11% from abroad.

- the cost of organizing and hosting the Barum Czech Rally Zlín was 147 million CZK. Visitors have to sleep somewhere, eat, refuel, use services, etc.

- the revenue from the organizing and hosting the BCRZ 2019 and its multiplications was 289 million CZK. CZK. Multiplication is a follow-up service where the so-called multiplier effect is created.

- the total revenue to the public budgets was 59 million CZK. CZK 41 out of every CZK 100 spent by visitors goes to public budgets.

- the accumulation of workforce due to the event organization created 197 annualised full-time equivalent jobs.

- the most important is the irreplaceable income to public budgets of CZK 22 million CZK. This amount represents the value that the Barum Rally brings in, which would never have been spent in the Czech Republic if the event had not taken place.

The amount of irreplaceable benefits represents the spending of foreign visitors. In the case of visitors from the Czech Republic, people can choose whether to go to Barumka, a concert or a cinema. Therefore, it is the value of the irreplaceable benefits that is important in terms of evaluating the importance of the event. More specifically, in 2020, when we had to cancel the rally, the economy of the Czech Republic lost this amount.

As has been said, we understand that in these challenging times, saving money is not easy for anyone. On the other hand, it is exactly the major sport and cultural events that are currently bringing significant resources into the economy of towns, regions and the whole Czech Republic, and they are helping to boost the country's economy thanks to the outstanding attendance. Major sport and cultural events bring many times more money into the economy of the country through visitor spending than they themselves need from the state. Finally, we would like to thank the city of Zlín, the town of Otrokovice, the Zlín Region and the state as a whole.
More information available at www.czechrally.com and don't forget to follow Barum rally on the official Facebook, Instagram and Twitter accounts.