The 51st edition of the Barum Czech Rally Zlín will take place again at the end of the holidays on 26-28 August 2022. Tens of thousands of fans watch the Barum Rally in the Zlín region every year, making the Zlín Rally one of the most visited sport events in the Czech Republic. Also this year, the FIA European Rally Championship (ERC) is expecting a quality spectacle. From this season, the European championship will move to a new promoter, WRC Promoter GmbH, based in Munich, Germany. 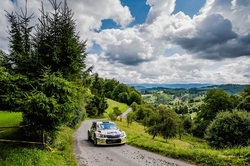 The centre of the competition will be concentrated in the regional city of Zlín. The start will be preceded by a technical acceptance ceremony on Thursday 25 August in the afternoon in Otrokovice. On Friday 26 August, qualifying and a trial SS Žlutava will take place in the morning on the track Otrokovice to Bělovm near the service zone. The official start will take place at 4 p.m. on the square in front of the Zlín Town Hall, the rally itself will start with an evening spectator Super SS in the streets of Zlín, followed by two stages. The entire rally is 624.21 km long and includes 13 stages with a total length of 202.51 km on seven tarmac sections. The longest and the most demanding stage of this year's Barum rally itinerary will be the Držková stage in the first leg, which measures a total of 24.32 km!

The Zlín Rally will traditionally kick off with a sharp speed on Friday evening with a circuit super special stage in the streets of the regional town. The first car will appear on the track as early as 20:45, after which the crews will hand over the competition cars to the closed car park under the Zlín Shopping Centre. The first stage starts at the same place on Saturday 27 August at 8:03 a.m. After a fifteen-minute morning service, the starting grid will face three special stages in the order of Březová (12.73 km), Držková (24.32 km) and Semetín (11.51 km), which will be completed twice and will be separated by a half-hour afternoon service. Saturday will be closed by a 45-minute evening service and then the cars will spend the night in a closed car park in Zlín.

The second leg will take place on Sunday 28 August and starts under the Zlín Grand Cinema at 7:34am. The crews will head to Otrokovice for the morning service and then will find the Bunč stage (length 15.20 km) and the legendary Maják (13.20 km) and Pindula (19.54 km) tracks as stated in the competition itinerary. The next set of six measured stages will be separated by a 30-minute lunchtime service. "We have prepared difficult stages that will challenge the preparation of the crews and cars. The competition will certainly not miss the intensity and difficult nature of the individual stages. The spectators have something to look forward to again," said Ing. Jan Regner, Director of Barum Czech Rally Zlín. The first car will appear at the finish line in front of the Zlín Town Hall at 17:03, and the award ceremony will take place at the same place at 17:15.