Barum rally announces a change in the director’s position

The 51st edition of the Barum Czech Rally Zlín 2022 (26-28 August) will bring a change of guards at the director's post. Even after twenty-four years, the Regner surname will not disappear from the position of the director of the major European rally, the long-time head of the Zlín rally Miloslav will be replaced by his son Jan. Seventy-two-year-old Miloslav Regner will continue to head the Barumka as he remains the chairman of the organising committee.  In practice, this means that the main responsibility for the management of the rally itself during the three-day event will rest on the shoulders of forty-three-year-old Jan Regner, while Miloslav, as head of the organising committee, will be in charge of the large organising staff for many months before the event itself. 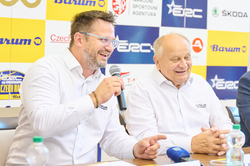 The professional life of Miloslav Regner (born in 1950) has been strongly connected with Barumka for almost forty-five years. He inherently belongs to the Zlín Rally, which has developed under his leadership over the years to the leading competitions of the European Rally Championship series. He is the main soul and the most prominent personality of this prestigious European rally in the Czech Republic. This experienced official started in 1974 as the leader of the Pohořelice - Komárov stage. Then he held the position of secretary for many years and since 1998 he has successfully led the competition in an uninterrupted series from the position of rally director. He has a total of twenty-three successful editions to his credit, however, two years ago the competition was not held due to the coronavirus pandemic. "Our path to the limelight has not been easy, but Barum rally has been lucky to have a great group of collaborators around it throughout the years, whom I thank for their selfless help and efforts. A big thank you to Continental Barum s.r.o, which has been the general partner of the rally since the first year, which is an incredible length of years," said Miloslav Regner.

Miloslav Regner's whole life is closely connected with motor sport. In short, he likes everything with wheels. Not many people know that he started as a driver and co-driver in rally. In the seventies, he succeeded in the audition for the position of the Barum rally team manager, which brought them success not only in the domestic environment, but also led them to a number of laurels on the international stage in the Mitropa Rally Cup. Since 1984, the Barum rally has been part of the European Championship series, in which the events were ranked by a coefficient system. The team around Miloslav Regner has, through hard work, taken the rally to the European elite, rated with the highest coefficients of 10 and 20. Even after the reorganisation and changes in the series, the competition has consolidated its place among the elite competitions that still form the series of the old continent today. Barum rally also became a pillar of the Intercontinental Rally Challenge series, which ran until 2012 and attracted a number of big-name drivers.

Miloslav Regner is also well known as a long-standing official of the Autoclub of the Czech Republic, where he was a member of the presidium for many years and now serves as a sports commissioner at motorsport events. He still serves on the Rally Commission and is chairman of the Slalom Commission. He is also active in the vintage car field, where he participates in competitions and gatherings of vintage car enthusiasts with his father's 1925 Fiat. He also brought his wife Marta, who is his closest collaborator and also the long-time head of the Barum rally secretariat, into motor sport. For his long-standing activity in this field he has received numerous awards, he is a holder of the Golden Buckle of the FAS AČR and a laureate of the Prize of the City of Zlín.

Ing. Jan Regner (1979) has been working in the organizing staff of the Barum Rally for over twenty years. He started to look into rally organisation as a student and after successful studies at the Tomas Bata University in Zlín he started to work in motor sport. He was in charge of producing materials such as timetables, itineraries, safety plans and more. Over time, Rally Zlín began to offer the production of materials to other organizers in the Czech Republic and abroad. The work team grew and since 2005 the Zlín organisers have been preparing materials for World Rally Championship events such as in Finland, Germany, Sweden, Cyprus and many more. Since 1998 he has been working for twenty-four years in the organizing staff of the Barum rally, where he has gained a lot of experience. He firstly held the position of Head of Dispatching and since 2002 has worked as rally secretary. In 2008, he became Deputy Director and in the following years also Chief Safety Officer. He is a member of the Presidium of the Autoclub of the Czech Republic, where he holds the position of Vice President for major sporting events. He is a member of the Rally Commission and Slalom Commission.

"At the moment there is a change, however it won't be a big change. Dad is staying on as chairman of the organising committee and we are just going to swap the positions of director and deputy director. In any case, it must be added that without a team of colleaguges we could not do much. The rally is very difficult to organise, especially in terms of people, with more than two thousand people involved in the organisation of Barumka alone. We need to thank everyone and wish them all a successful next year," said Jan Regner, Director of Barum Czech Rally Zlín.