Barum rally to take place in the traditional date, but in a new shape

Half a year remains until the start of the biggest Czech automobile competition, the Barum Czech Rally Zlín. The 51st year will take place on the traditional date at the end of the summer holidays from 26 to 28 August 2022. The Zlín-based rally will again be part of the FIA European Rally Championship (ERC) and the Czech Rally Championship (MČR). The organizing team around the long-time director Miloslav Regner has been working at full speed since the autumn and will present a number of novelties to the fans at the end of the summer. From now on, the European Rally Championship will be run under patronage of a new promoter, which, following the established World Rally Championship schemes, is introducing the final Power Stage in all ERC competitions and live broadcasts will be available from each special stage of the rally. 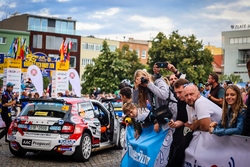 The 51st Barum Czech Rally Zlín will run in a quick sequence of four days - from the reconnaissance to the finish ramp - similar to last year. The overture will be provided on Wednesday by the presentation of the crews collecting road books and optional administrative checks. On Thursday, the crews will start the reconnaissance, which will continue until Friday. Also administrative checks and scrutineering will take place on Thursday. On Friday morning there is scheduled a qualification stage and shakedown, this year taking place closely to the service park traditionally located in Otrokovice in the area of the rally's main partner, the company Continental Barum. Later in the afternoon, there will be a ceremonial start in front of the Zlín City Hall and in the evening, an attractive Super Special Stage will take place in streets of Zlín. A significant change is coming on Saturday, as there will be only six special stages placed on three sections. "The reason for this change is live broadcasting, because we had to adjust the entire schedule to the requirements of the promoter. There must be approximately an hour between the starts of the particular stages so the broadcasting can continue from stage to stage," said Miloslav Regner, Clerk of the Course Barum Czech Rally Zlín. On Sunday, there will be prepared other three stages, which will be run twice. The final Power Stage measures almost twenty kilometres. The best crews will appear at the finish of the competition on Zlín Náměstí Míru square shortly after 5 pm. "The 51st Barum rally measures a total of 623 km and contains 13 special stages on seven sections with a total length of 202 km. The crews can await demanding special stages with a number of difficult sections, which will prove the readiness of the competition crews and their cars," said Miloslav Regner.

Before this season, the European Rally Championship series has been transferred to a new promoter, WRC Promoter GmbH, which is based in Munich, Germany and belongs to the Red Bull corporation. The promoter of the FIA World Rally Championship (WRC) series holds the rights for the ERC since 2022 onwards, which is an important political and sporting shift for this prestigious championship. At the same time, the ERC has strengthened the WRC Promoter's portfolio, which has already included the World Rallycross Championship (World RX) in recent years. There is a strong vision to make the ERC an intermediate step for joining the WRC. This secures there will be no term collisions between these two prestigious series this season, like it happened last year.

The Zlín organizers were recently very close to the Barum rally's inclusion in the WRC World Championship. After the renunciation of the Ireland rally, the promoter had been diligently searching for the thirteenth event in this year's WRC calendar, and the Barum Czech Rally Zlín reached the final selection of candidates.

Finally the priority was given to the Ypres Rally in Belgium, which was part of the WRC already last year. "It was incredibly close, we have never been so close in history to get the World Rally Championship event to Zlín. Not only us, but especially the fans in the Czech Republic would fulfil their childhood dreams. Everything was worked out within two weeks, but in the end the promoter chose the Belgium rally, which hosted the world championship last year," said Jan Regner, the Deputy Clerk of the Course. Nevertheless, the effort and enthusiasm of the involved people from Zlín really impressed the promoter. "We were very impressed by the professionalism and plans of the organization team in Zlín. This rally remains a key event of the European Championship and the door to the WRC's ambitions is open. We look forward to further cooperation," said Jon Siebel, CEO of WRC Promoter.

The entire eight-round European Rally Championship series can be now watched online on the paid WRC+ platform. This means that also each special stage of the Barum rally will be broadcasted live, following the scheme of the WRC events. The final special stage will be run as a Power Stage and will be broadcasted live on TV stations or via the new All Live (WRC+) system. It will always take place at the end of the rally on Sunday with the first car starting at 16:08. Unlike previous seasons, the crews will not receive bonus points for each Leg, but they will score extra points for the final Power Stage.

In recent years, the Star Rally Historic has become an integral part of the Barum rally and this additional event, which has grown into a full-fledged event and a stable part of the Czech Historic Rally Championship, will take place for the fourteenth time from Friday to Sunday. Spectators can also look forward to the Rally Legend demonstration drive again. "After Friday's city stage in the night streets of Zlín, crews with historic cars will drive between the passages of ERC and Czech crews during Saturday and then at the end of the field. On Sunday, they will start in front of the ERC start field, with arrival at the finish ramp ahead of the best crews in the ERC competition. A total of 176 kilometres at 11 special stages are prepared for the historic crews," said Miloslav Regner, director of Star Rally Historic.

The 51st Barum rally promises an extraordinary spectacle and will definitely be worth it! The Zlín organizers believe that the competition will take place with numerous crowds of fans like it was before emerge of the coronavirus pandemic so all together can enjoy the last holiday weekend spiced with the smell of petrol and burned tyres. More information will be available at www.czechrally.com and related social networks Facebook, Instagram and Twitter.