Drama at the end: Cais crashed, Kopecký won for the ninth time!

The first-class stunt does not happen. 22-year-old driver Erik Cais and his co-driver Jindřiška Žáková ended up in a ditch with their Ford Fiesta R5 MkII at the final special stage at Májová and did not see the finish line of the Zlín rally. The jubilee 50th Barum Czech Rally Zlín was dominated for the sixth time in a row and for the ninth time overall by Jan Kopecký in Škoda Fabia Rally2 Evo, his co-driver Jan Hloušek celebrates his premiere triumph in Zlín. The Norwegian-Swedish crew of Andreas Mikkelsen and Jonas Andersson, moved to the second place, losing 40.1 seconds. The podium will completely belong to the Škoda Fabia Rally2 Evo cars, as Filip Mareš and his co-driver Radovan Bucha moved to the third place with a one-minute gap. 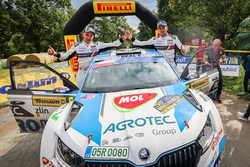 The Kopecký and Hloušek crew came off well with the competition when they won the first three special stages, including the Super Special Stage in the night streets of the city of Zlín. The 39-year-old driver led the competition after the eighth stage 5.8 seconds ahead of Erik Cais, who won by a large difference on the last stage of Saturday's leg at Pindula, and the native of Fryšták was convincingly after the victory since then.

At Sunday's leg, Cais set the fastest times in the opening four SS and had a lead over Kopecký by more than 20 seconds before the last pass through Májová. There he did not manage the demanding more than 25-kilometer track and crashed.

Kopecký learned about the fact that his competitor crashed and became the Barum champion again from the reporters at the finish of the final special stage. "Did he (Erik) crash? What can I say... It's simple. I think he deserved to win. I'm very sorry that Erik went off at the last special stage. Since yesterday's Pindula, he has been pulling the rope and during today's stage he was invincible," Kopecký complimented to Cais, who would become the youngest winner of the Barum rally if he won. And so, it is still Roman Kresta, who was 24-year-old in 2000 during his triumph.

"It was a really challenging rally. On Friday, the conditions on the track changed often and today's last SS was the same. On some places it was wet, on some it was dry. Yesterday it was a big fight with Andreas and Erik. Erik was incredibly fast on the last Pindula. It's a shame that he crashed. He really deserved to win. I would like to thank Honza Hloušek, the whole team and my whole family. We are glad that we are here," continued the old-new 39-year-old champion.

For a long time, the Norwegian pilot Andreas Mikkelsen was in the third place. He significantly failed to break into the duel of the two Czech crews in front of him, but thanks to Cais' crash he moved to the final second place, when he lost 40 seconds to the winner. "We appreciate the second place very much. It was a tough fight, but I think we had a good weekend. We have taken the lead in the European Championship, the result is important. We are happy," said the Norwegian pilot.

Filip Mareš, who moved to the third place arrived in the following minute. "It was fast, the last SS was interesting. Poor Erik, who showed a perfect performance here, no one can deny it. But that belongs to the show, the conditions were difficult and anything can happen during such a long stage. I am glad that we moved up in the order and finally it's a great position," said Mareš, who finished second at the previous Barum rally.

In the ERC Junior category, Ken Torn from Estonia (Ford Fiesta Rally3) won, he drove almost all the time alone since the second stage after the accident of his competitor Norwegian Oscar Solberg (Ford Fiesta Rally3). In the ERC2 classification, the first Hungarian Tibor Érdi junior (Mitsubishi Lancer Evo X) finished 1:24.3 minutes ahead of the Pole Dariusz Poloński (Fiat 124 Abarth RGT). In the 2WD classification of ERC3 + ERC3J, the Spaniard Josep Bassas took the triumph after the fearless drive, whose Peugeot 208 Rally4 finished 1:16.0 minutes earlier than the Frenchman Jean Baptiste Francheschi (Renault ClioRally 4).

From the top drivers, Tomáš Kostka (Škoda Fabia Rally2 Evo) did not reach the finish line of due to a technical failure after SS2, Dominik Stříteský (Škoda Fabia R5) crashed in the third stage. Adam Březík (Škoda Fabia R5) did not even start in the Saturday's second pass through the Hošťálková leg due to the technical issue, Finn Jari Huttunen (Hyundai i20 R5) and Albert von Thurn und Taxis (Škoda Fabia Rally2 Evo) did not see the finish line due to a crash. SS11 Biskupice also meant the end for the reigning Czech champion Václav Pech (Ford Focus WRC) due to the technical issue. Russian Alexey Lukyanuk (Citroën C3 Rally2) did not even start race because of an accident in the Wednesday's pre-event test.