Jan Kopecký: I felt sorry for Erik, but that's sport

He was already reconciled with the fact that he would not add the sixth triumph in a row at the Barum Czech Rally Zlín. Before the final special stage, Jan Kopecký lost more than 20 seconds to the first place in the Škoda Fabia Rally2 Evo and was surprised at the finish line that he became the winner. It was because of the accident of race leader Erik Cais, who failed to reach the finish line and failed in the primacy of the youngest Barum winner at the age of twenty-two. 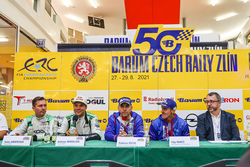 "It's hard to describe the moment I found it out when one doesn't experience it. I was sorry for Erik, on the other hand these are races, a sport like any other, where there are winners and losers. Erik made a mistake and has beaten himself," said the experienced 39-year-old driver, who already has one similar experience. "Once in the Azores, the car in front of us had a technical problem and we drove three kilometres in the dust behind it, and then I flipped the car on its side. One must not underestimate anything at all, the race ends only at the finish ramp," said Kopecký after the ninth triumph at the Zlín rally.

He himself started well into the jubilee 50th edition, by winning the first three special stages. He took a total of seven, as well as the unfortunate Cais. He started losing to the young racer at the end of Saturday's leg. "It was very tricky rally, perhaps the hardest Barum rally I've experienced. Due to the conditions that prevailed and the difficulty of the track, which was quite rough in some places. Especially the last stage was quite variable, damp in places, then dry, then damp again, a part of Májová and Troják completely on the water. I didn't hang out there, but I didn't risk. We drove the same speed the whole race," said Jan Kopecký.

Second place went to the Norwegian-Swedish crew of Andreas Mikkelsen and Jonas Andersson. The former factory driver of Volkswagen and the winner of three World Championships started at the Barum rally for the first time since 2012. "I knew it would be difficult, and it really was. When observing the stages, I found out that they were a kind of the same, and I expected a tough fight with the home drivers who know the routes. I had in my mind I had to keep calm for a good position," said the 32-year-old current leader of the European Championship.

The third place belongs to the Czech crew Filip Mareš and Radovan Bucha, also with the Škoda Fabia Rally2 Evo. "Our evaluation is definitely positive, we are maximally satisfied with the third place among such competition. We must also look at the fact that the crews with world championship experience ended up ahead of us. It was challenging, but we enjoyed it," revealed the Czech driver, who was especially successful on longer tracks. "We were able to push there, on the contrary, we were not so strong on short stages. We really liked the 50th edition. For all those who reached the finish line, I have the words full of appreciation," Mareš concluded.