Driver's responses at the finish line

All fifteen special stages of the jubilee 50th Barum Czech Rally Zlín, which is part of the European and Czech rally championships, are over. After the final stage, we interviewed some racers who, after overcoming the difficult stage Májová, arrived in the service park in the area of Continental Barum s.r.o. in Otrokovice. 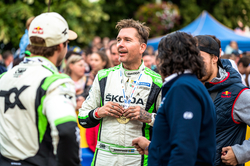 Jan Kopecký (Škoda Fabia Rally2 Evo, starting no. 6 – 1. place):
"We can see here that the race really ends at the finish line. A technical failure may occur or the competitor may crash. This happened to me years ago in the Azores. I know how Erik must feel now. These are not good feelings, but one must learn from them and not repeat mistakes. Otherwise, this year's Barum rally was one of the hardest, the weather was not very good and some of the routes were quite broken. In the end, I have to thank my co-driver Jan Hloušek, who helped me in everything."

Andreas Mikkelsen (NOR, Škoda Fabia Rally2 Evo, starting no. 2 – 2. place):
"I really appreciate the second place. It was a tough fight, but I think we had a good weekend. We have taken the lead in the European Championship, it is an important result. We are happy."

Filip Mareš (Škoda Fabia Rally2 Evo, starting no. 10 – 3. place):
"The race was really difficult because the conditions changed a lot. We probably all expected more water, but in the end it was dry. The exception was yesterday's Pindula, which gave everyone a hard time. And the last SS was great. Too bad for Erik. He showed absolutely great performance, no one can deny it. Anyway, anything can happen, even those 20 seconds of lead were not enough to win in the end. But I'm glad that we moved up in the order, and that it was enough for the third place in the end."

Norbert Herczig (HUN, Škoda Fabia Rally2 Evo, starting no. 5 – 4. place):
"I have started at the Barum rally twice, but for the first time I got to the finish. And fourth place is decent. Maybe if I was less careful, it would turn out even better."

Mikolaj Marczyk (POL, Škoda Fabia Rally2 Evo, startovní číslo 4 – 5. place):
"I'm happy with the fifth place because I wanted to be in the top five, so great. I'm sorry that Erik didn't win in the end, because he invested everything into it and we became good friends."

Efrén Llarena (ESP, Škoda Fabia Rally2 Evo, starting no. 3 – 6. place):
"I'm glad I made it to the finals. It took me a long time. And I'm sorry I couldn't finish all the stages due to crashes on the track. I'm very happy, but it was a bit crazy. Accidents, slippery roads, race on time. It gave me a lot of experience, I already know how to be faster. I also enjoyed it a lot, I will come again next year."

Callum Devine (IRL, Ford Fiesta R5 MkII, starting no. 15 – 7. place):
"I'm excited, it's a shame about the cancelled special stages. Otherwise, it was a drive I'm happy with. It was a fast and rough race. I learned a lot."

Miroslav Jakeš (CZE, Škoda Fabia R5, starting no. 16 – 8. place):
"Thank you for all the congratulations, but with such times I expected more. I will get ready for another races both in the Czech Republic and abroad. Eighth place is good, but I don't follow the result so much."

Martin Koči (SVK, Škoda Fabia Rally2 Evo, starting no. 17 – 10. place):
"It was difficult today, but I think it's fine. I can certainly say that we enjoyed it. It was probably the driest day, so we had a good time. I'm definitely happy for the top ten. For us, it was a race in which we more or less drove and had fun. I am even happier to be among the top ten."

Věroslav Cvrček jun. (Škoda Fabia R5, starting no. 63):
"Thirteenth place is definitely a success. Even if I felt good, it wouldn't be much better. The competition is fierce. Just look at Martin Koči or Martin Vlček, for example. One drives in the world, the other knows it here well. They were a little ahead of us and the times are pretty decent. I am glad that we were able to pass the whole competition without any problems. We really enjoyed it."

Jan Talaš (Škoda Fabia R5, starting no. 66):
"We made some kilometres that are important to us. I think Tom and I did well. Together, we now have driven about 230 kilometers. Of course, the special stages were cancelled. But even with the test it makes about 230 and 235 kilometres in total. "

Ondřej Bisaha (Hyundai i20 R5, starting no. 23):
"It was more dry, we pushed more again. Especially today it wasn't so broken and wet. What tires did I take? I had the whole car on hard ones. More precisely, we had soft tires in the morning, but medium would have been more suitable. And now we had medium."

Jaromír Tarabus (Peugeot 208 Rally4, starting no. 76):
"Yesterday we were changing our tires and lost the time card. So we were looking for it before the start of Pindula, but that's not a big deal. But a puncture shortly after Pindula's start was. We lost about five minutes, which is sad, it was in the dark. It just didn't go well. Because of that, we couldn't fight for the first place in 2WD of ERC nor in the Czech championship. Today we tried to push as much as possible. Unfortunately, they cancelled the last stage. I'm sorry for Erik Cais. I know what it's like to retire down from second or third places. I don't know what it's like from the first place, it must be even worse. Anyway, Erik is young and has a lot ahead. Coming back to us, we were had a nice race. Unfortunately, we were no longer able to move up."