After the first three special stages on the final day of the 50th Barum Czech Rally Zlín, we interviewed the competitors of the leading positions in the competition standings. The ambassador of the jubilee Barum rally, Erik Cais, a native of Fryšták, remains in the lead. The 22-year-old, who competes in the Ford Fiesta R5 MkII with co-driver Jindřiška Žáková, revealed that he intends to push for the best possible result the whole day. He praised the support of the fans again. Currently the second, defending champion Jan Kopecký (Škoda Fabia Rally2 Evo) has stated that Cais is basically running his own race. "He's driving crazy fast," said the eight-time Barum rally winner, who races with co-driver Jan Hloušek. 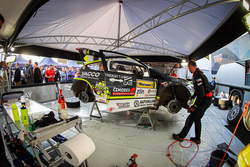 Miroslav Jakeš (Škoda Fabia R5, starting no. 16):
"Being the first car is not bad feeling, but the weather could be better. I miss opened cuts on the track, I was used to them. The stage was 20 kilometers, which I didn't mind, but I didn't go there for a long time, so next time it will definitely be better."

Callum Devine (IRL, Ford Fiesta R5 MkII, starting no. 15):
"We're satisfied. We can work with the time we have. Conditions are a bit better than yesterday - the track is drier. We enjoy it, it was a good morning."

Efren Llarena (ESP, Škoda Fabia Rally2 Evo, startovní číslo 3):
"It was very difficult and we had to deal with many problems. That's just the way it is, we're still fighting."

Miko Marczyk (POL, Škoda Fabia Rally2 Evo, starting no. 4):
"It's good. Halenkovice was not completely unknown to me, I have experience with it from a test drive. I didn't know Biskupice, but I was able to get to know the track quickly, so it was fine. The last stage Majová was very difficult. We were not that fast, but at least we know what to expect next time."

Norbert Herczig (HUN, Škoda Fabia Rally2 Evo, starting no. 5):
"We had to drive a bit carefully. Unfortunately, we did not have enough of new tires. What do I mean? In the morning we started with two new tires and two used ones. Because of that, I had to be quite careful on the track when it came to checking cars and tires. Anyway, it is a success that we got here - to Otrokovice. We are happy."

Filip Mareš (Škoda Fabia Rally2 Evo, starting no. 10):
"The drive was not bad, we are satisfied. We just made the wrong tire choice, so we struggled a bit with the last stage. But otherwise it was good."

Andreas Mikkelsen (NOR, Škoda Fabia Rally2 Evo, starting no. 2):
"Luckily, we don't have to deal with any problems, but it's still a tough competition. On the other hand, it makes it very interesting. It is not easy to achieve the best possible performance here. "

Jan Kopecký (Škoda Fabia Rally2 Evo, starting no. 6):
"We are satisfied with the performance. We try to go to the maximum, we can't do more. But Erik is going his own race today - he is driving crazy fast."

Erik Cais (Ford Fiesta R5 MkII, starting no. 8):
"Right at the first morning stage, I expected Honza (Kopecký) to try something. I know that they were testing on part of the Halenkovice stage often. I expected to reach the finish line and see some time loss. But the opposite was true. It was a wonderful time at the finish, we were, I guess, four seconds faster. I won't lie, I push all day. Májová is from half my home stage. Not the other half, but still I tried to push there too. What to say? It's beautiful and we will try to make it to the finish line. I will be very happy for any support. Let's hope I get there. Our fans were not missing on the stage again, they are absolutely the best. They really show they are Ultras. Thank you very much for that."

Petr Semerád (Škoda Fabia Rally2 Evo, starting no. 20):
"It was quite good. The last stage - Májová - is difficult, so we backed off. On one crest at Májová we jumped too much and damaged the gears."

Yoann Bonato (FRA, Citroën C3 Rally2, starting no. 9):
"It is quite good I would say. With water on the road, it's easier than last night. Májová's long stage was really beautiful. It wasn't the easiest, but it was a satisfying morning for us."

Martin Koči (SVK, Škoda Fabia Rally2 Evo, starting no. 17):
"This year's Barum rally is very demanding. The conditions on the track were really difficult on Saturday, today it's better. Changing the car and the co-driver in a hurry is a big change for me. Braking points, speed, everything is different. But we try to enjoy it. I think we are doing well. "

Martin Vlček (Hyundai i20 N Rally2, starting no. 21):
"I'm driving the novelty, as you said. And every such has imperfections. But I can say that I am quite satisfied with the rally course so far. This time we have only one goal - to reach the finish line and finish the race well."

Věroslav Cvrček jun. (Škoda Fabia R5, starting no. 63):
"This year's Barum rally is difficult, but that makes it beautiful. It is a real, authentic competition. It was quite complicated on Friday. On the way to the first stage I lost the gears and it was tough to repair it. It was barely possible to shift and we lost thirty seconds. It was a huge despair at the time. It didn't even look like it would turn out. Luckily, it turned out in the end. Saturday was great, and I felt amazing in the car. We had decent times, we drove from behind. We are testing new Yokohama tires that I've never used before. They are much better than I expected. Thanks for the opportunity to try them. Today it's a little worse, I felt pretty sick at night and in the morning, I didn't sleep much. I'm fighting with myself. I hope we finish the race. It's a challenge and we have to hold on."

Jan Talaš (Škoda Fabia R5, starting no. 66):
"It was pretty good. We're getting used to it. We just made a puncture at the first stage, but then it went well. We are speeding up slowly and learning."

Ken Torn (EST, Ford Fiesta Rally3, starting no. 31):
"I feel good about the morning stages. We do well yet. We just enjoy individual legs, which are really beautiful – same as yesterday."

Alberto Battistolli (ITA, Škoda Fabia Rally2 Evo, starting no. 22):
I have a positive evaluation. We try to keep up the speed. Conditions are not so tricky as yesterday, but still difficult. We do our best, we drive our best."

Ondřej Bisaha (Hyundai i20 R5, starting no. 23):
"We are fine. We're just worried about the tires because it's hot, so we're wasting time. Today we save on spies. We didn't even know if it was going to rain - it's nice in the end."

Tibor Érdi jun. (HUN, Mitsubishi Lancer EVO X, starting no. 39):
"I feel good about it, and even though the time is not the best - it's better than last time here. We'll fight for the first place (in our category)!"

Jaromír Tarabus (Peugeot 208 Rally4, starting no. 76):
"We're satisfied because we really try to get to the imaginary podium. Unfortunately we lost a lot yesterday, approximately five minutes. I try to catch it back but there is the whole leg ahead, so we will see."

Josep Bassas (ESP, Peugeot 208 Rally4, starting no. 44):
"Today it's good, yesterday surprised us a lot, because we're not used to such conditions. But today really looks fine, which is important."