Cais increases the lead by twenty seconds after SS12!

At Sunday morning's special stages, the 22-year-old driver Erik Cais from Fryšták came significantly closer to a great victory at the jubilee 50th Barum Czech Rally Zlín 2021. Cais in a Ford Fiesta R5 MkII dominated all three special stages of the Sunday leg. He stood out mainly at the longest leg of the SS Májová, where he built up a possible key lead. He overtook Jan Kopecký (Škoda Fabia Rally2 Evo) by 13 seconds on a more than twenty-five-kilometer track and overall keep the eight-time Barum champion behind by 20.4 seconds! The third is Norwegian Andreas Mikkelsen. 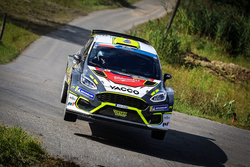 The morning special stage Halenkovice was again the best for the leading Cais. He managed to win with 3.8 seconds ahead of Norwegian Mikkelsen on the nine-kilometer stage, but especially in the battle for the overall triumph he gained 4.2 seconds to Jan Kopecký (both in the Škoda Fabia Rally2 Evo). Another Czech crews did not do well, as only the eighth Filip Mareš reached the elite top ten. Overall, Václav Pech (Ford Focus WRC) finished second in Halenkovice with a loss of just under one second, but he only belongs to the classification for the Czech championship.

In the next SS Biskupice, which is with its 7.59 kilometers the shortest stage in the competition, Cais set off with a lead of more than 6 seconds. And he was able to increase it even more when he passed the third special stage in a row. The drivers ran the same order as in the morning, the Norwegian-Swedish crew Mikkelsen, Andersson finished second, with a loss of 0.7 seconds and then the third Kopecký, Hloušek with a loss of 1.1 seconds to the winner. From the Czechs, the top ten entered only the fifth Filip Mareš and the tenth Slovak-Czech crew Kočí, Tureček. Václav Pech dropped out significantly to the 73rd position with a loss of more than fifty seconds due to technical problems, and subsequently retired from the competition.

The first part of the Sunday's leg ended with a demanding special stage at SS Májová. The 25.43-kilometer long route brought another break in the limits of the 22-year-old driver. He earned the fourth victory of SS in a row, when he set a time of 13:42.1 minutes and left the second Kopecký behind by 13 seconds! The third Norwegian Andreas Mikkelsen no longer has the fight for the victory in his hands, the loss at Májová with 21 seconds to the winner puts him in the third place with a gap of 21.7 seconds to the second place, however got a lead of more than a minute over the fourth Filip Mareš. He replaced the Austrian Wagner in the fourth position, whose Škoda Fabia Rally2 Evo experienced problems with the half-axis. Adam Březík (Škoda Fabia R5) and Antonín Tlusťák (Škoda Fabia Rally2 Evo) had an accident at SS12.

Ken Torn from Estonia (Ford Fiesta Rally3) competes in the ERC Junior category alone. In the ERC2 category, the Hungarian Tibor Érdi junior (Mitsubishi Lancer Evo X) leads 14.6 seconds ahead of the Frenchman Cartier, who won all today's SS and pulled off the loss to the Hungarian competitor. In the category of 2WD ERC3 + ERC3J, Spaniard Josep Bassas drives calmly with Peugeot 208 Rally4, as he has a lead over Frenchman Jean-Baptiste Franceschi (Renault Clio Rally4) 1:19.6 minutes.