The 50th Barum Czech Rally Zlín will begin with the attractive Super Special Stage in the night streets of Zlín for the sixteenth time in the history of the competition. This year it will take place in a modified shape, which is required by the construction works on the intersection of Vodní and Bartošova streets. The city circuit test appeared in the Barum rally itinerary for the first time in 2005 and has not been missing since then! 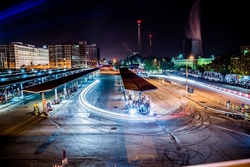 Recently, information, that the spectator-popular Super Special Stage will not take place this year, begun to spread among the motoring public like an avalanche. A new roundabout is currently being created at the construction site and it will make traffic in the centre of the regional city smoother after its completion. "In recent days and weeks, a lot of fans have constantly filled us with questions about whether the city stage will be run or will be omitted for this year due to the construction of this roundabout. We can assure fans that they will not miss it even during the round 50th year. It will traditionally take place on Friday evening. In agreement with the management of the city of Zlín and the construction contractor, we can use their temporary panel communication. It goes around the roundabout and is being used by buses and ambulances. Many thanks to everyone involved for this helpful step," said Miloslav Regner, long-time director of Barum Czech Rally Zlín.

The main change of the track can be found shortly after the start and the subsequent straight section, when the competition cars, instead of continuing to the bridge, turn right onto the panel road and continue towards the popular bus station and former Svit industry area. After approaching the flyover in Gahurova street, the stage continues in traditional form and direction. Unlike previous years, the iconic places of the city stage will be run in the opposite direction, just like in 2016. "From last year's length of 9.51 km, the special was shortened to 9.18 km, but the main part of the track has been preserved and fans can enjoy the stage like every year before. From 5 pm, beautiful Bugatti oldtimers will race on the track in the Grand Prix Bugatti race, then we have included an exhibition ride of historic cars in the schedule, after which the second GP Bugatti race will take place. From 7 pm, the city circuit track will belong to the Star Rally Historic competitors, and after 9 pm, the main Barum Czech Rally Zlín starting field will enter the opening special stage of the rally," specified Regner.

An important message for the fans is that the Zlín organizers are counting with the presence of spectators at the special stages. "We don't have a podium in a limited area, such as music festivals, and the audience doesn't concentrate in hundreds in one place. Our imaginary podium is more than two hundred kilometres long and thanks to that we differ from other events. We have enough space for visitors, distributed in several places at intervals, standing in the open areas where they are not crowded in dozens of rows. Last year, we said that we want to run the rally with the audience as we really appreciate their participation," concluded Miloslav Regner.