Barum rally and the city of Zlín are preparing anniversary celebrations

The international motorsport competition Barum Czech Rally Zlín and the city of Zlín are inseparable. While the famous European rally will celebrate its 50th anniversary together with spectators at the end of the holidays, Zlín is expecting a significant jubilee of the 700th anniversary of its first written mention in the coming year. 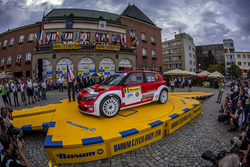 The city of Zlín has been one of Barum rally's important partners for many years and will also support this prestigious European rally this year. "We thank the representatives of the city, led by Mayor Korc, for their significant support, which they give to the Barum rally every year. We would also like to thank you for last year, when the city of Zlín helped the rally with half the cost after the forced cancellation of the rally, without this help it would be difficult for us to look to the future. Cooperation with the city of Zlín continues this year as well. The rally starts on Friday 27 August from náměstí Míru square in front of the town hall and two days later we will welcome the most successful crews of the jubilee year. Náměstí Míru square will also be the centre of the rich additional program from Friday to Sunday, when on Friday and Saturday it will be part of a program called Barum rally is sporting," said Miloslav Regner, director of Barum Czech Rally Zlín.

The history of the city of Zlín is firmly connected with the previous forty-nine years long Barum rally tradition. Its prestige has been growing over the years, since 1983 it has been part of the European Rally Championships and from 2007 to 2012 it was part of the Intercontinental Rally Challenge (IRC) series and in recent years has been one of the strong pillars of the FIA ERC series. Since 2007, Barum rally has been a part of a series promoted by Eurosport, which has given the entire rally extraordinary media benefits helping to raise the profile of Zlín and to attract more visitors to the Zlín region. Every year, over fifty thousand unique spectators visit the Zlín rally, which places this race in the position of one of the most visited sports events in the Czech Republic! The big names of rally sport have entered the gallery of winners, Jan Kopecký has celebrated a triumph a total of eight times and has won the last five years in a row. Vladimír Hubáček, John Haugland from Norway, Enrico Bertone from Italy and another domestic driver Roman Kresta celebrated three times. Big names of competitive sports such as two-time world champion Walter Röhrl from Germany, world champion from 2019 Ott Tänak from Estonia, five-time world vice-champion Thierry Neuville from Belgium, winner of several WRC rallies Andreas Mikkelsen from Norway or Daniel Sordo from Spain started in Zlín. The 50th anniversary of the Barum rally will take place at the end of August and the celebration of this jubilee will comprise of 211 competition stage kilometres in total.

In addition to the Barum rally, a significant anniversary awaits the city itself. The first mention of Zlín is from the end of February 1322, when Fricek of Egerberg sold to the queen widow Eliška his share in the property inherited from her father, specifically Hustopeče, several surrounding villages and the town of Zlín. "The purpose of the celebrations is to present the city on a national and international scale. Zlín is an extremely unique, creative and original city. The celebrations will remind local residents of what they can be proud of and attract tourists, for example, so that they can also find their future home here," said the Mayor Jiří Korec for the purpose of the celebrations.

The Zlín celebrations will work with the number seven, based on the number of centuries that the city has gone through in its development. The past, presence and vision of individual segments will define seven key characteristics that can be used to identify today's inhabitants of the city, but which also describe the greats of Zlín's history and important contemporaries. The key qualities are creativity, perseverance, entrepreneurship, diligence, pioneering, openness and education. The celebration program will consist of long-term projects and individual events. One of the biggest events of the celebrations in June 2022 will be a big festival called "Zlín lives". It will bring several multi-genre scenes in the public space of the city, street art and an experience program.