Voting done, the finale of the creative competition is approaching

The first year of the creative competition called Paint, Win and Help is a little closer to
its final. Voting for the most popular works took place for almost three weeks, when it
was scheduled to end on Wednesday, June 23. Simultaneously with the voting, an
exhibition of all competition paintings took place in the premises of Zlín Region
municipality. The results are now added up and they are also signed by one of the
commission members. 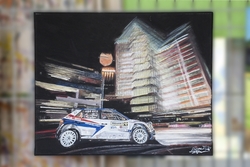 "It took a lot of work to prepare and put together the exhibition. We are glad
that the effort of our team was not wasted and almost everyone who entered
the building of the Zlín skyscraper stopped for a tour," said Jan Regner, who is
responsible for Barum Czech Rally Zlín marketing activities. The expert jury sent all
forty-five submitted works to the main part of the competition. Its members chose four
works entirely on their own initiative, which, according to their words and according to
various parameters, stood out above the others. These were works by the following
authors: Zuzana Bílá (Night stage in the centre of Zlín), David Grygárek (Helicopter
chase), Dušan Pospíšil (Pavlík - Jirátko, Audi Quattro A2) and Kryštof Hebelka (In the
dust). The mentioned authors will get an unique opportunity to be a part of the
ceremonial start of the rally, where they will launch one of the crews from the starting
ramp. They will also receive an invitation to the opening ceremony at the Zlín
townhall and as a reminder they will receive a book entitled 50 Years of Stories of the
Barum Czech Rally Zlín.

The voting for the most popular painting also brought a great response. This took
place on the official Barum Czech Rally Facebook profile. It gained a lot of attention,
which was not expected even by the organizers of the competition - the paintings
album gained the attention of more than thirty thousand fans, who contributed with
more than 1700 votes. "Not only our fans but also the contestants took care of
sharing the album. The contribution, which was not financially supported in
any way, is a beautiful result of viral spread and interest in what is happening
at the Barum rally," said Martin Bill, who is responsible for much of the
communication on the rally's social networks. The valuable prizes that the organizers
put into the competition were also a strong motivation for gaining votes. Among them
there were adrenaline experiences in competition cars, a helicopter flight or the
entrance tickets to the rally. "Winners can apply for their prizes immediately via
e-mail at bill@czechrally.com or wait for us to contact them," Martin Bill says.
The winners can also come in person to the permanent rally secretariat, which is
located on Hornomlýnská street in Zlín, for their prizes.

Currently the event Paint, Win and Help continues with exhibitions in various places
in Zlín. From June 29, all works will be on view in the premises of the Zlín town hall,
then they will be moved to the lobby of Continental Barum s.r.o. in Otrokovice, where
they will be located from July 20. The exhibition will return to Zlín on August 9, when
it will be hosted by the Golden Apple shopping centre. As the grand finale there will
go on a charity auction of all submitted paintings, and all collected proceeds will go to
charity, specifically for children affected by insidious leukaemia. The organizers of the
competition once again committed themselves to social responsibility which begun
years ago with a successful campaign Marrow4Tomorrow. "Thanks to all the
contestants who sent us amazing works. With their work, they become not only
a part of the Barum Czech Republic, but they also help where it is
needed," Miloslav Regner, Clerk of the Course Barum Czech Rally Zlín, said all
competitors.