Preparations of the anniversary Barum rally in full swing

Barum Czech Rally Zlín organizers have renewed preparations of the 50th jubilee edition of this popular automobile competition, which is scheduled to its traditional date at the end of summer holidays - from 27 to 29 August 2021. Despite the difficult global pandemic situation the organization team led by long-term Clerk of the Course, Mr. Miloslav Regner, is working on full to make the rally happen this year. 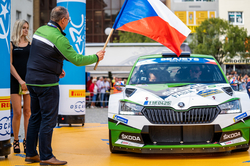 At the beginning of July 2020 they were forced to announce postponing the anniversary edition of the Barum Czech Rally Zlín to 2021. It was a difficult decision, because up to the very last moment all the team was showing a big effort to arrange running the rally that year. "Quick spread of Covid-19 around the region came to our way, but from today's view, the decision to move the rally to 2021 was right and the only possibility," says Miloslav Regner.

His team is hoping the special anniversary Barum rally will go on this year. "We are working hard, negotiating with local authorities and agencies and arranging several different scenarios according to actual situation. We want to run the rally in the scheduled date, at this moment we have a half-year room to get ready. We hope the pandemic will get weaker soon together with running vaccination and everything will get closer to normal during this time. We want to arrange the anniversary Barum rally so the spectators will be allowed to visit and enjoy the event. Despite the long-term view is unclear at this moment, we are optimistic," adds Miloslav Regner.

"Although the times are not easy now, we are trying to establish new sponsorship relations and of course to maintain the existing ones. Our team is working hard and we have optimistic mood. The route layout of the upcoming rally has been ready since November 2020, right now we are working on road books and safety plans of the stages," says Jan Regner, Deputy Clerk of the Course.

The Barum rally has been for many years a keystone of the prestigious FIA European Rally Championship. Also the 2021 season will be run under the coverage of the Eurosport Events promoting company and will contain eight various events around the European continent. The season will kick off at the beginning of May in the Azores islands. "The 2020 season was demanding for everyone and motorsport was not an exception. Finally there were run at least five rallies within the FIA ERC and outside the circuit races this championship was one of the first restarted ones after the lockdown in spring. Although the Barum rally was missing, the series kept its quality, also thanks to great interest of many drivers. Their competition was really strong and we believe this year, despite the pandemic situation is still not great, the sporting side will be high again," says Petr Linhart, the FIA ERC competitors' coordinator and member of the Barum rally HQ working group.

After the season beginning at Azores islands the European series will continue with fast gravel rallies in Poland and Latvia. At the end of July it will move to hot tarmac around Italian capital Rome and another month later the Barum rally will open the second half of the season. After the Zlín-based event there will follow another gravel rally in Portuguese location of Fafe and the season will culminate with two tarmac events in Hungary and Canary islands.

In conclusion, let's review all championships and series, which have been already confirmed for the upcoming 50th Barum Czech Rally Zlín. There are some more still under negotiations, however one of the major news is that the Star Rally Historic will be newly run over the whole weekend including the Sunday's leg.