The Barum Czech Rally Zlín has linked its important milestone with year 2020 – it has been half-century since there was run its very first edition. Originally we planned to celebrate this jubilee with an exceptional programme and extended rally route so this year's edition would become simply unforgettable. 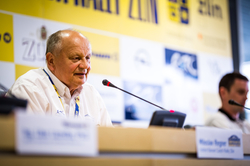 The overall budget of the rally has every year reached ca. one million Euros. This sum contains promotional costs, route rental fees, road reconstruction works before and after the race, printed materials for public and the competitors, as well as salaries for workers either preparing the rally over the whole year or for temporary employees involved only in the race itself, such as route marshals, officials, timekeepers, medicals and rescuers and other supporting staff – together it is more than 2000 people. The originally planned extended rally version would increase the budget by ca. 10% more, however first negotiations with our partners during autumn and winter looked well and promising. But only few weeks later the situation rapidly turned wrong. The original plans with a rich additional programme, extended rally route, invited famous rally names and many other attractions were gone and we started to focus only on the survival of the rally itself and on securing its viability for the future.

Due to the coronavirus outbreak the economics of the whole country was halted for quite a long time and the consequences affected most of the people and companies. Tourism, culture, automotive industry and sport have become one the most struck sectors and from our view as rally organizers this is a really crucial combination. After another round of meetings with our partners we were suddenly facing a budget loss estimated at ca. 200.000 EUR which was not possible to cover with our own resources. We contacted several state organizations and we have to thank to all, who were forthcoming, especially Mrs. Klára Dostálová, her Ministry for Regional Development of the Czech Republic and to the CzechTourism agency. Thanks to them we got the first hope of saving this year's Barum rally. These organizations realized that Barum rally helps local economics with extended needs of fuel, accommodation, gastronomy and many other services, as it every year generates more than a million Euros of takings for local businessmen, of which more than 200.000 Euros return back to the state budget. So we are really happy for this partnership with the Ministry of Development and the CzechTourism agency.

Beside the economic aspects there was still actual the question regarding the coronavirus hygienic arrangements. Tens thousands of people visit the Barum rally every year and currently permitted limit of one thousand people per event is insufficient for us, therefore we at the end of May contacted the Ministry of Health as well as the regional hygienic authorities to secure, that all our arrangements and ideas were accurate for all involved. We hoped that at the end of August all restrictions would be already cancelled, for example just like at Tour de France which will be run at the same time as our event and the spectators' management works there similarly compared to the automobile rallies.

Because of all these unexpected circumstances we set up the end of June as a deadline, when we still can halt the rally preparations with relatively small loss. In upcoming weeks, during the most intensive phase, the loss of the sources would be multiply higher and terminal for the whole rally and its future. With another set of negotiations the budget deficit was slightly lowered to ca. 150.000 Euros, but it was still a big sum of money, which we were missing only one week prior to the decision deadline.

At that moment we had two opportunities. Either to give up straight stating, that the rally is cancelled. Or to show the cards and to ask the rally fans, companies and wide public for their help. We expected this step would raise both positive and negative reactions. Some of them were not easy to read, however the positive feedback and the support made us really happy. We were contacted by people from our country as well as from abroad, including the Clerk of the Course of the Ireland Rally, rally fans from Italy and other foreign countries, we have also got some e-mails from our fellow countrymen from the USA.

By 1 July 2020 at 8:30 a.m. the transparent account contained 315 305,19 CZK collected from many rally fans. And thanks to quick help of few new as well as our traditional partners something unbelievable happened – the whole needed amount was completed in just one week! We have to thank to all contributors as well as to general partner Continental Barum, Zlín city municipality, to companies RI Okna, Mr. Pavel Janeba's and to ACCR President, Mr. Jan Šťovíček for their positive response and action.

Unfortunately despite this success there has once again emerged the coronavirus threat as the number of infected people has rapidly grown up in recent days. Especially during the last weekend the situation has become alarming. At this moment the infection is being spread mainly in the northern region of Karviná, but newly established restriction of maximum 100 people present at sporting events in that region is a strong warning for us. In previous days we again several times talked to regional hygienic authorities and we were highly recommended to consider again running the Barum Czech Rally Zlín this year.

Over the years the Barum rally has grown to event which is annually evaluated as the second most important motorsport event in our country, just behind the MotoGP race held in Brno. This year the motorcycle Grand Prix will be run again, but without any public. We were always proud that Zlín was year by year visited by more than 50 thousands unique spectators and it was you, enthusiastic rally fans who was creating that famous and unique atmosphere at the stages. So we couldn't imagine running the rally without you, especially now, when many of you showed your approach to the Barum rally in the money collection. It has been just a week when we though the problems with the Covid-19 were history and we "only" had to settle that budget issue. Unfortunately, the problem is back and so we came to the conclusion, that the health protection is the priority. Despite many of you, our rally fans, have supported the rally, in view of unpredictable situation with the epidemic development and possible restrictions the necessary and right solution is to cancel the Barum Czech Rally Zlín in 2020 and postpone it until next year.

After seeing the successful collection this result is truly disappointing for us. However the health of everyone is the most important thing. Anyway, we must thank again to all supporters and donators who helped us during the previous week and at the same time we declare, that all contributions collected at the Barum rally's transparent account will be refunded back to donators' accounts within following days. For the traditional cooperation we want to thank to our general partner Continental Barum, Zlín city and Zlín region authorities, to the Ministry for Regional Development, Ministry of Education, Youth and Sport, to the National Sporting Agency, to the CzechTourism agency and of course to all of our long-term partners, local citizens and everyone involved in the Barum rally.

I would like to thank honestly to everyone who have supported us and I look forward to meet together again in 2021.