It took only few weeks when one local virus infection in China has turned to a global pandemic. The coronavirus has hit many countries and particular governments have established various arrangements to reduce its further spreading. The Czech Republic is no exception – the actual restrictions luckily help to slow down the infection, however they almost halted whole economy and ordinary life in the country. 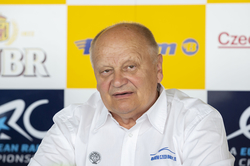 Travel industry, culture and sport will suffer the deepest impacts. Depending on planned date as well as other key factors, many organizers have already called of their events, willing to run them later in the year, or they even cancelled them completely. Also the Barum Czech Rally Zlín organizers are currently facing the fundamental questions regarding running the anniversary 50th edition of this race, originally planned to the end of August 2020. Mr. Miloslav Regner, Clerk of the Course, describes the actual situation

How does the current situation look like in relation to the Barum rally? Can the event actually go on?
M.R.: "The biggest complication is that no one currently knows what happens next week or next month. Barum rally is an international rally so we have to take in to account not only the arrangements from our government, but also follow situation in other countries. If we can run the rally in compliance with local regulations, there will be still a question whether people from abroad will be able to come here. It's not clear if mass events with big attendance will be allowed. Our rally is every year visited by tens of thousands people, so on one hand we have a huge attendance, but on the other hand from hygienic point of view rallies are less problematic, because people are not located in one hall or in a stadium but they spread along more than 200 kilometres of stages around the whole region. We hope that authorities will take this into consideration."

Have the plans and preparation changed? Do you think about the change of rally date?
M.R.: "Our work has not stopped, we are even more active than usually in this part of year. We want to be ready and just wait for further information from the authorities, whether the rally can go on or not. Of course, there is also an option of moving the 50th Barum rally to 2021, but this is not the way we would like to go. If the rally goes on this year, it will be run in its original date. Rally Islas Canarias and Rally Azores have already moved behind us to the autumn, and Rally Liepaja will be postponed as well, but so far without detailed time plan."

The economy in the country has rapidly slowed down, how it will influence the partners of the Barum rally?
M.R.: "In fact this is our biggest worry. Most of the companies will try to stabilise their operations and secure their employees rather than putting money in sponsorship at these crucial times. However we are optimistic and hope that the situation will get stabilised soon and the companies will get in motion again. The Barum rally should go on in more than four months time and it could be enough time for them to get well. This event every year offers great opportunity to earn extra money to the local companies and traders thanks to extensive demand for accommodation and gastronomy, fuels and other services and I think that especially in the current situation the rally would be a great positive impulse for them."

Many event organizers have been facing similar problems, how do you see the situation in the ERC and other championships?
M.R.: "It's a big question, whether it is even possible to secure and re-arrange the sporting calendars. Many rallies from local championships up to the WRC have been postponed and many organizers hope that they can run their events later in the year. But usually the main season runs from March to November and many breaks between the events are necessary due to demanding logistics for example. So for me it's hard to imagine that all these events can be run in the autumn within just few weeks. It would be problematic also for the rally car renters, because they run their cars with various drivers and in different series at the same time. There is an idea in the WRC to merge 2020 and 2021 seasons into one, but we have no such news either from the ERC or the Czech championship. At first we have to wait, how and when the general restrictions will be released."

What is your message to the Barum rally fans and supporters?
M.R.: "I would like to ask everybody for the patience and to follow the obligatory arrangements. If we get responsible and for some time change what we were used to, the sooner we can get back to the normal life. We all would like to walk without a mask on the face, to shake hands, to meet each other and to visit cultural and sporting events such as our rally. I would like to thank to the people, as well as to our partners and authorities for their support. I hope we all meet together again at the end of August."