Barum Czech Rally Zlín is standing ahead of a big milestone – in 2020 it will run its anniversary 50th edition. The biggest Czech automobile race will celebrate this achievement in a good shape based on time-proven shape from previous years – like a part of the eight-round FIA ERC series and the Autoclub Czech Rally Championship. It will go on in August and after temporary change of date in 2019 it returns to its usual time slot at the end of summer holidays - from 28 to 30 August 2020. 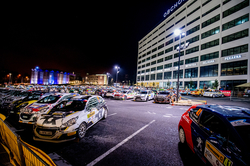 Barum rally organizers plan to celebrate on many levels, however the sporting one will be the main. Few months back the FIA received - and afterwards confirmed - an exception for increasing the overall rally stage length, which is usually limited by 230 kilometres. "With this anniversary we want to offer something special to the crews," says Mr. Miloslav Regner, the Clerk of the Course at Barum Czech Rally Zlín. "At least for this one special year we would like to return to some old and legendary stages. Of course it requires many negotiations with villages and property owners at places, where the rally has not been run for many years. But the approved exception gives us a room for arranging the route and we believe that its final shape will be extraordinary."

Over the previous 50-years period the Barum Czech Rally Zlín has gone through an interesting progress. It belonged to many prestigious championships and welcomed lots of famous rally stars who provided plenty of remarkable performances to the spectators. The whole half-century tradition of this rally is underlined with a partnership with a Barum tyre brand, which has been linked to the rally as the general sponsor from its very first year. The history of the Otrokovice-based tyre plant began together with Barum rally – first edition of this race was run at the occasion of launching the production in the new factory back in 1971. Many years a circuit stage was run around this industry area and now the Continental Barum company offers its sites for placing the service park during the rally every year.

In 2020 the Barum rally will also write another chapter of its relationship with the FIA European Rally Championship. This connection has lasted without any interruption since 1983 and for many years the Zlín-based rally plays a role of one of the key-events in the FIA ERC Calendar. "The FIA European Rally Championship has enjoyed a long and very successful relationship with the organisers of Barum Czech Rally Zlín," says Mr. Jean-Baptiste Ley, the FIA ERC Coordinator. "As one of the highlights of our calendar, the month of August is always eagerly anticipated and every year we look forward to and enjoy a great welcome and plenty of on-stage action. In addition to being well organised, the event is extremely popular among our registered drivers and teams, who take part in great number each season. We extend our congratulations to the Barum Czech Rally Zlín organising team for reaching this impressive milestone."

Beside the FIA ERC regulars and other foreign guest crews the Barum rally will again welcome many home crews competing in the national Autoclub Czech Rally Championship as well as participants of the Czech Historic Rally Championship who will take part in the 13th Star Rally Historic. Rally organizers decided to fulfil the wishes of many historic drivers and for the first time this additional historic rally will be run also on Sunday special stages. Also the anniversary 50th edition of the Barum Czech Rally Zlín will offer a rich additional program where the rally fans can play the active roles – for example they can taste the ride in a R5 rally car in a co-driver's seat or can take a competing part in the Green Rally – the fourth edition of the race for electric or hybrid cars. In a word, the anniversary Barum rally will be magnificent!