Kopecký at the top: Barum Rally went great for us

Jan Kopecký and Pavel Dresler, on the Škoda Fabia R5 Evo, celebrated his fifth consecutive victory, eight overall, at the Barum Czech Rally Zlín. Kopecký had the competition entirely in his hands because on Saturday special stages he lost two of the biggest pursuers Alexey Lukyanuk and Nikolay Gryazin from Russia. Thirty-seven-year-old Kopecký dominated, more precisely by 1:31.5 minutes ahead of another Czech crew Filip Mareš, Jan Hloušek. 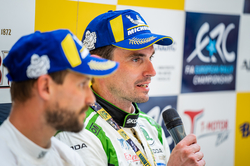 The driver from Kostelec nad Orlicí secured his seventh triumph in the Czech Championship. "I feel great. Everyone always wants to win. That's clear. Our task was to win the domestic champion, which we also managed. The Barum Rally was victorious again," said Jan Kopecký at a press conference. From Zlín he hurried to the airport and head to Germany. He has a test on Monday afternoon before the German Rally, which is part of the World Championship.

Kopecký cared more about the information on Martin Vlček and Ondřej Krajča and their crash than his victory. "I have been told that they are OK. This is the best news we can get at the end," said Kopecký.

The co-driver Pavel Dresler also smiled at the meeting with journalists. "At the beginning of the competition, it seemed close. We struggled for seconds with the Russian drivers, but then they made mistakes, and we won," said an experienced navigator who scored his sixth win at the Barum Rally.

The huge fight was for the second place overall and at the same time for the European junior champion. Finally, Filip Mareš and Jan Hloušek on Škoda Fabia R5 were lucky to beat their British rivals Chris Ingram and Ross Whittock. They won by 0.3 seconds! "We feel great. We are happy to be at the finish. For me, it was the most beautiful day of my career. I also have to congratulate the boys, Chris and Ross, who pushed us to the edge of the possible and we had a great fight with them," said the 27-year-old Mareš.

In the third place, Brit Ingram was also happy to finish, although such a close race will hurt for a long time. "It's hard to swallow this loss. We are pleased with our result, yet third place in this legendary and tough competition is a huge success. We have to stay positive, look for more motivation, and remember the fact that we ended up here on the podium," said the 25-year-old.

"I agree, we must be satisfied with ourselves. It is a very demanding rally from the co-driver's position. It's a very jumpy track. There is not much to see from the car," said Whittock.