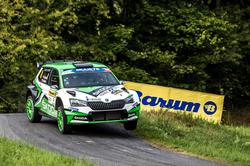 Jan Kopecký and Pavel Dresler were number one at the beginning of Leg 2 of the 49th Barum Czech Rally Zlín. On all stages, he managed to keep a safe gap over his pursuers and even won SS 13 and 15. Alexey Lukyanuk (Citroën C3 R5), the reigning European champion, made it somewhat easy for Kopecký, given his problems. Not even winning a couple of stages helped the native of the Russian capital of Moscow. Another favorite from Russia, Nikolay Gryazin (Škoda Fabia R5), driving with Latvian license, suffered a crash on Pindula.

But the thrilling battle was for the second place. Brit Chris Ingram and Filip Mareš were neck to neck throughout the whole Barum Rally. Towards the end, it seemed that Ingram has the upper hand. However, the difference was only 0.6 seconds before the last stage. Kašava, the longest stage, was supposed to bring the conclusion. It turned out to be a happier end for Filip Mareš. Ingram was too wide in one of the turns, putting him only 0.3 seconds behind Mareš. Mareš and his co-driver Jan Hloušek were 1:31.5 minutes behind Kopecký. Ingram lost on Kopecký 1:31.8 minutes.