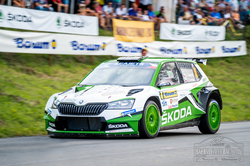 The seven-time Barum Rally champion Kopecký finished second in the first three stages on Sunday. He always did better than his closest pursuers Ingram and Mareš. Brit placed sixth at Maják, third at Pindula and fifth at Kašava. Mareš did similarly - 5th, 7th, and 3rd place. Barum Rally has ended for Lukasz Habaj from Poland (Škoda Fabia R5) which means no points in ERC. He couldn't fix damaged frame from yesterday and retired before SS 10.

Nikolay Gryazin (Škoda Fabia R5), Russian with Latvian license, retired today because of a crash at the legendary Pindula stage, despite scoring three wins. It turned out to be a sad Sunday. Václav Pech (Ford Fiesta R5), who won the Barum Rally back in 2003 and 2014, also retired duo to broke half-axle. The organizers stopped the stage twice. First, because of Gryazin's accident and then Roman Odložilík's Škoda Fabia R5 caught fire.

Alexey Lukyanuk decided to give Barum Rally another shot. Yesterday, in Halenkovice stage, his Citroën C3 R5 suffered a puncture, and after finishing the stage, the left front wheel suspension got broken. He used his superrally card and proved his exceptional driving skills by winning on Pindula and Kašava. But he is still over 11 minutes behind Kopecký.

But the fierce battle is in the Junior Championship. Jean-Baptiste Franceschi (Ford Fiesta R2T) won two stages and took the lead in ERC3J. Efrén Llarena (Peugeot 208 R2) now has three stages to close the gap of 4 seconds. Third is Sindre Furuseth (Peugeot 208 R2) from Norway. Czech youngster Erik Cais (Ford Fiesta R2T), the fastest in Kašava, has a shortage just 13.7 seconds on the leading Frenchman. And the podium is only 1.2 seconds away! There is certainly a lot to look for in the last three stages.