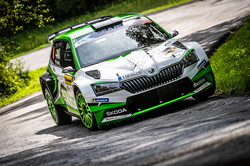 The seven-time winner of the Barum Rally and the reigning Czech champion, Jan Kopecký, kept podium throughout Saturday and he is getting closer to his eighth overall victory in Zlín and Czech title as well. Unlike last year, he avoided punctures, and the worst position was third after SS 3 and 4. He returned to the top in the afternoon stages, winning three stages in Leg 1.

The chances of a 37-year-old native of Opočno to win the eighth victory in Zlín are all the higher, because his greatest rival, Alexey Lukyanuk from Russia, and Alexey Arnautov, retired. His Citroën C3 R5 in the SS 8 suffered a defect of the left front tire. Then the suspension got damaged. The thirty-eight-year-old European Champion has not entered the last stage SS Kostelany.

Suddenly, Chris Ingram and Ross Whittock (Škoda Fabia R5) from Toksport WRT team, were holding second place overall. They were even the fastest ones on the SS 9. Ingram is going head to head with Filip Mareš for the European Junior title in ERC1. Brit is ahead by almost four seconds. Puncture in SS 5 slowed down Nikolay Gryazin and Jaroslav Fedorov (Škoda Fabia R5) from Sports Racing Technologies. Despite winning two stages, they hold the seventh place.

In the ERC2 Italians Andrea Nucita, Bernardo Di Caro (Fiat 124 Abarth RGT) lead ahead of Juan Carlos Alonso, Juan Pablo Monasterol (Mitsubishi Lancer Evo X) from Argentina by more than eight and a half minutes. The current leader, Zelindo Melegari, had a serious accident and retired.

In the ERC3 ranking, Efrén Llarena and his co-driver Sara Fernandez (Peugeot 208 R2) won half of Saturday's stages and lead. Despite their victories, almost 8 seconds behind them is Jean-Baptiste Franceschi and Benoît Manzo (Ford Fiesta R2T). Czech driver Erik Cais and co-driver Jindřiška Žáková at the wheel of the Ford Fiesta R2T rank fifth after Leg 1.

The Barum Rally will culminate on Sunday, 18th August. Leg 2 is 253 km long and includes six stages on the Maják, Pindula, and Kašava, measuring 103 km. The best crews will be cheered on the finish ramp in front of the Zlín Town Hall around 5 pm.