Kopecký back in lead ahead of Lukyanuk 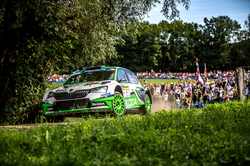 Kopecký and Lukyanuk retained their positions from previous tests in the SS Semetín. They swapped places, and Kopecký got ahead. "Our opponents are going very fast, but from what I heard, they are quite lucky to be on track. We try to avoid any mistakes. We are driving fast, but not at all costs, our goal for today is to keep Alexey behind," said Jan Kopecký. "Until I lead, I won't be happy, and I will not enjoy it. I feel like we're doing a great job, but there's still something missing, but I don't know exactly what. I feel we don't have enough grip, I'm not sure," admitted Lukyanuk.

In the top five, there are two more Czech drivers. The third is Václav Pech, and the fourth is a talented young man Filip Mareš. Both of them moved up one place in SS 7. "We are driving quite fast, I am trying to avoid mistakes, and we are doing quite well," said Václav Pech. "We have a very close duel with Chris Ingram. Just a few seconds are between us. We have to stay on the road and go as fast as possible," said Filip Mareš. So far, fifth British Chris Ingram said they are mutually changing positions. "I think Filip was always faster at Semetín, but in the next two stages, I will beat him. I'm confident," said Ingram.

After a flat tire, Nikolay Gryazin (Škoda Fabia R5) is again fighting for the best possible position. The Russian driver with a Latvian license was victorious in SS 7, but it is a long way from 14th place to top ten.