GRAND PRIX going to its second half in Zlín

The 49th edition of Barum Czech Rally Zlín will also include the third part of the premiere series of GRAND PRIX historical vehicles called Bugatti Grand Prix. Only cars made before 1939 can compete. Fans will surely enjoy these remnants of the very beginning of motorsport, when they roar through Zlín on Friday 16th August. One of the competitors is Markéta Profeldová, driving Bugatti 35 Nostalgic Edition, and her co-driver Barbora Černošková, a sport-news TV reporter from Czech Television. 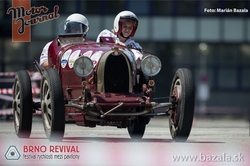 This car is an exact copy of a Bugatti made in 1926. It was constructed in the company Samohýl Motor in Zlín. "Everything is furnished and set up exactly as in the mid-20s. Most people who would sit in this car wouldn't get it going," said Markéta Profeldová, who is satisfied with her performance in this beauty. She praises her cooperation Barbora Černošková. Černošková is a famous face of Czech Television's sports editorial team and also a patron of the GRAND PRIX series of historic vehicles. "At the press conference, which Bára moderated this year, we agreed that we would like to work together. Bára is a great co-driver. We clicked immediately. We are both athletes, and we know what we want from races. We can cope with the negatives that every sport brings," she said.

This year's premiere GRAND PRIX of historic vehicles consists of four races. The first two have already taken place. In mid-June, it was a legendary long-distance race of 1000 miles of Czechoslovakia. And at the end of June, there was the Brno Revival event - a festival of speed between exhibition halls. After the Bugatti Grand Prix in Zlín, the championship will culminate in the first half of September in the Zbraslav - Jíloviště race, whose director is Markéta Profeldová. "We consider the race a commitment to its tradition and strive to diversify the program every year. Many thanks to the Mayor of Zbraslav, Zuzana Vejvodová, and the Mayor of Jíloviště, Vladimír Dlouhý. To all partners, friends, and members of the Veteran Car Club Prague, who are involved in the event and without whose help I cannot imagine doing it," said Profeldová at a press conference in Prague. In her words, combining the role of the director and the competitor will be very demanding, but she intends to face the new challenge and do the best she can.