Top prize coming back to the Czech Republic

At the occasion of the 48th Barum Czech Rally Zlín 2018, a traditional photo competition was announced. After two years, the motorsport photographer Marcin Rybak from Lodz, Poland, was, figuratively said, dismounted from the throne, and the main prize remained in the Czech Republic. The new king is a photographer Daniel Šimek from www.rallyservice.cz. He won again after three years, and it is his third overall triumph. He won this favorite photo competition in 2011 and 2015 and was second in 2014. The prizes for the photo competition donated RALLY MODELS - Antonín Babík, JNK Studio Zlín - production and distribution of video cassettes. Company ALITRON CZ, s.r.o. prepared for a winner a year-long subscription of a specialized motoring magazine RALLY. 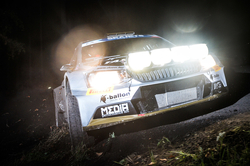 "Every year, we are pleasantly surprised by the high number of participating photographers from many European countries. We are pleased that the photo competition has a constantly rising level. Nearly three hundred participants in the photo competition sent us a record number of photos. Professional motorsport photographers are more and more often being successful. An international jury composed of many personalities of the rally community does not have an easy job. Every year it evaluates a vast number of photos. The increased interest suggests the phenomenon of the Barum Rally has spread through Europe," said Miloslav Regner, Chairman of the Jury and long-time director of Barum Czech Rally Zlín.

We congratulate all the awarded authors and look forward to more submissions in the newly announced photo competition for the 49th Barum Czech Rally Zlín 2019!