Tomáš Kostka confirmed the start at this year's Barum Rally

Zlin-born rider Tomas Kostka has so far scored eleven starts at Barum Czech Rally Zlin and achieved three times the top three. In mid-August, he will add his twelfth start at his favorite domestic rally. The thirty-four-year-old driver talked about this at a press confer-ence of the organizers of the Barum Rally. Together with his co-driver Ladislav Kučera, he will race the Škoda Fabia R5 managed by Kresta Racing Team. And again, he will be one of the hot candidates for medals at the most prestigious domestic competition. 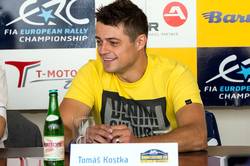 Kostka has earned the podium three times in the Barum Rally. His best result was three years ago when he won second place and was third in 2012 and 2014. The year before was the last time he raced and he fought a tough fight for third place with his brother-in-law and three-times winner Roman Kresta. It was a close race which went bad for Kostka in the last stage. Kostka proudly thinks back to 2012, seven years ago when there were heavy conditions on the track and together with his co-driver Miroslav Houštěm were among the few who managed to deal with them and finish. "That year is the one I like the most. In difficult conditions, Mirek and I achieved a fabulous third place with the Škoda Fabia S2000. I value this medal position the most," said Kostka during the press conference, which took place at the premises of Tomas Bata University in Zlín.

The rally fans will surely again enjoy seeing Tomáš Kostka on Barum Rally. "I'm glad to be back. Of course, this was difficult in terms of finances, but everyone has to deal with this. There are two tests ahead of us and everything should be ready to go for the best place again," Kostka said firmly, unfortunately, he didn't get the money he needed last year. Kostka raced at the Barum Rally with different types of racing specials. He debuted in Zlín behind the wheel of the Mitsubishi Lancer EVO VI, then tried the VIII and IX evolution, followed by Fiat Grande Punto Abarth, Škoda Fabia S2000, Ford Fiesta R5 and Škoda Fabia R5. "I do best with Fabia R5 because I spent more time testing it. In short, it is a matter of my heart," Kostka said. In pre-season, he took part in the national road cycling championship in Trnava alongside Petr Sagan and Zdeněk Štybar.

Originally he only focused on circuit rally but now he has more than fifty starts in a rally. At Rallysprint Kopná he raced Ford Fiesta RS WRC, but due to a damaged rim that led to a defect, he retired quite soon after the start. "Shortly after the start, there was a gap between concrete panels. The left rear rim cracked, which unfortunately caused huge damage. We continued for another two kilometers, but they cost us nine thousand euros. It is unbelievable what damage the cracked rim has done," concluded Tomáš Kostka.