Miroslav Jakeš’s Fabia is the face of the Barum Rally

Samohýl Škoda Team crew Miroslav Jakeš and Petr Machů are after the trophy in the Auto-club Czech Rally Championship 2019. Twenty-nine-year-old Jakeš fought a tough fight in the final section with one of the biggest world rally stars Daniel Sordo from Spain for a bronze medal in the last year's Barum Czech Rally Zlín and lost only by 0.3 seconds. Jakeš's Škoda Fabia R5 will be in the spotlight before the start of this year's 49th edition, as his car became the face of the Barum Rally and will appear on posters, city lights, billboards, and all print and promotional materials. 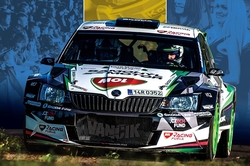 "It's an honor for me. I didn't think I'd become the face of the most important rally event in our country. Of course, this will put some pressure on the result, but as soon as I put my helmet on my head, everything will fall off," said Miroslav Jakes at a press conference in the town hall of Zlín. However, this year's season is not going well for Jakeš and Machů. "In Šumava we had our biggest crash ever, which was caused by my own mistake. We have always done good in Český Krumlov and this year we reached a decent fourth place. Unfortunately, at the recent rally in Hustopeče, due to an error in the control unit in the engine, we were forced to retire in the last stage and so we lost the second place we were holding at that time," explained Jakes.

The year 2013 was a springboard for this driver from Hutiska-Solence. He managed to reach a sixth place in the Barum Rally and won the prestigious Colin McRae Flat Out Trophy. "Last year it was our first time with Škoda Fabia on the Barum Rally and it worked out perfectly. We placed fourth. Although we did not stand on the podium, which made us sad, but we were the second best Czech crew," smiled the rider from Vsetín, who will celebrate his 30th birthday at the beginning of October.

Petr Mach is his co-driver in the racing special Škoda Fabia R5. This very experienced navigator is going to be his partner in crime this year too. "We are now focusing on the Rally Bohemia, which will take place during the second weekend in July around Mladá Boleslav. We do miss the points from Hustopeče event, but there is no reason to give up the ship. We will fight for the best result possible, the Barum Rally will be a turning point. It is the highlight of the season and we have to do our best and get ourselves and the car ready in the best possible way," said Petr Machů.

Miroslav Jakeš has been impressed by cars since he was a child. He sat at the wheel when he was four years old. He first raced in go-karts, then hill climb racing and eventually made it to a rally championship. He has been competing in a rally for over ten years. His first rally was in 2008 in Český Krumlov. That year he also became a European Champion in hill climb racing. In 2013, he was sixth with Mitsubishi production car on Barum Rally. He achieved three triumphs in Rallysprint events, last time it was this spring at Kopná. Six years ago he was second overall in the Czech Rallysprint Championship, and a year later he took the same position in the Czech Rally Championship.