Supplementary Regulations for the 49th Barum Rally were released

The organizers of the Barum Czech Rally Zlín have issued Supplementary Regulations for the 49th edition, which will be held from 16th to 18th August 2019. FIA and National Sporting Authority (ASN) approved the document less than two months before the start the event. The Barum Rally is the sixth event of the eight-part FIA European Rally Championship (ERC) and the closing event of the Autoclub of the Czech Rally Championship 2019 (MCR). The points collected here will figure in the Abarth Rally Cup or in the national championship in the Lenz Adam Cup and the Peugeot Rally Cup. 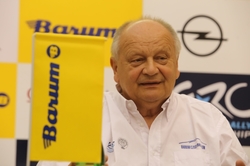 The release of Supplementary Regulations revealed this year's track. The organizing crew led by a long-time director Miloslav Regner prepared a 770 km long rally made of 15 special stages of a total length of 219.6 km on eight sections. On Friday, 16th August, after the ceremonial start in front of the town hall in Zlín, the crews will take on the spectacular Super Special Stage in the streets of this regional city. On Saturday, 17th August, there are scheduled eight special stages, which will be run on four sections called Březová, Semetín, Halenkovice, and Kostelany. Leg 1, including the Super SS, is 517 km long with 116 hot kilometers. On Sunday, 18th August, Leg 2 has six special stages on sections called Maják, Pindula and Kašava adding another 103 km and 253 km in total to the count.

The registration procedure changed this year. Any crew that wants to participate in the Barum Czech Rally Zlín can apply in three different ways: a) as an ERC crew (better starting number, qualification, points for FIA ERC) b) as a non-ERC crew in the international field (no qualification, but still in the international field, the first day starts after all priority cars) c) as a non-ERC crew in the national field (the national field starts after all the international crews). Each competitor of the FIA European Championship (registered and also unregistered) must fill the online rally application form at https://registrations.fia.com/erccze. All competitors (FIA European Championship and Czech Rally Championship) must fill in the application form on the website: https://www.czechrally.com together with the service form regarding additional space and other requirements such as electricity, joint service, etc. The deadline for applications is Sunday 28th July at 6 pm. The detailed registration procedure can be found on the website of the Barum Rally.

Supplementary Regulations containing all the basic information about the Barum Rally can be downloaded at www.czechrally.com. Further information on one of the most important motoring events in the Czech Republic can be found there.