Barum Czech Rally Zlín is taking place this year a little bit earlier than before. The 49th edition will be held in the middle of August and from 16th to18th August 2019. Tens of thousands of fans watch the Barum Rally in the Zlín Region every year, which makes this rally one of the most viewed sports events in the Czech Republic. Also this year Barum Rally is part of FIA European Rally Championship (ERC) and will feature a high-quality spectacle and a packed start list with a couple of top European champions. Unlike before, Barum Rally is now the closing event of the Auto-club Czech Rally Championship 2019 (MCR). 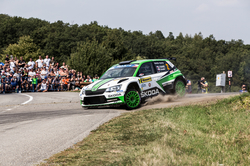 The regional town of Zlín will be the center of the competition. Scrutineering is held on Thursday, 15th August, in the afternoon in Otrokovice. Then, On Friday morning, 16th August, the Qualifying stage and the test SS are taking place on a section from Pohořelice to Komárov, near the Service park. The ceremonial start will take place on the square in front of the Zlín Town Hall at 4 pm, the rally itself will start with the evening with Spectators' Super SS in the streets of Zlín, followed by two full-fledged competition days. The entire rally measures 770 km and includes 15 special stages of a total length of 219.6 km on eight tarmac sections. The last special stage of this year's Barum Rally is going to be the most demanding and also by far the longest one reaching almost 25 kilometers. One of the now-classic stages Pindula is coming back after one year pause, it appeared in the itinerary during the third edition back in 1973! "Last year we decided to skip this legendary stage because of the ongoing infection called African swine fever and opted for a safer option. Luckily, the infection is now over and the legendary stage is once again part of the itinerary for the Barum Rally. We have prepared difficult stages to test crews' and vehicles' skilfulness. We are sure the competition will have enough rush thanks to the difficult character of the special stages. The spectators have something to look forward to," said Miloslav Regner, director of Barum Czech Rally Zlín. Compared to last year, almost half of the special stages were replaced. The organizers put some old-time sections of the special stages to the Saturday's Leg 1. It is a special stage called Kostelany in the area of the Chřiby highlands containing demanding section around Roštín.

The organizers from the Auto Club Barum Zlín are expecting a very good starting field. About forty R5 vehicles are expected to appear in Zlín, along with a number of great names coming from Europe and more. Lukasz Habaj from Poland and Chris Ingram from the UK are currently dominating the European Rally Championship. Only one point is between these two drivers both competing on Škoda Fabia R5. On the third place is the reigning European champion Alexei Lukyanuk from Russia who had a crash in the Azores and also did not finish the rally in the Canary Islands. The Spectators can look forward to the tough battles in the ERC1 (ERC28) and ERC3 Junior Championship.

Star Rally Historic is now an inseparable part of Barum Czech Rally Zlín. Its 12th edition is also for the fourth time part of the Czech Rally Historic Championship. Bugatti Grand Prix is a traditional part of the Barum Rally opening program. For the eighth time, historic cars from the 1920s and 1930s will be roaring in the streets of Zlín. However, this is the first time these cars will participate in a new series called GRAND PRIX historic. It comprises of three events (1000 miles of Czechoslovakia, Brno Revival and Zbraslav-Jíloviště) and the best rider will win the Auto-club President's Challenge Cup.

There is also Green Rally on the program for the third time, which is a rally for electric and hybrid vehicles that are focused on the drivers' skills. And apart from trying first hand the regular special stages, the competitors will also enjoy some cultural and gastronomical activities. Finally, Zlín Bikes, the cycling tour de Zlín meant not only for professionals but for the general public as well, which follows the path of the night stage.

Detailed information can be found on the official website www.czechrally.com or via social networks.