The Barum Czech Rally Zlín organizers have been awarded with first prize in the popular Golden Wheel 2018 poll in category Motorsport event of the year. This achievement was based on public voting as well as on decision of expert jury. The Zlín-based rally retained the success from previous year in competition twelve other motorsport events. Jan Kopecký, the multiple Barum rally winner and the current WRC2 champion, again became the overall winner of the poll. 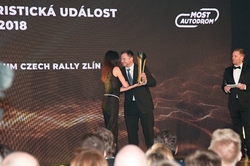 The ceremonial prize-giving gala evening was held in an industry area Pragovka in Vysočany, Prague. The Golden Wheel is the Czech oldest motorsport poll, its tradition goes back to 1976. In recent years it has gone through major structural changes and currently it contains many new categories as well as wider participation of public.

For the Barum Czech Rally Zlín the biggest attention was again paid to the category Motorsport event of the year where it competed against races like Brno's MotoGP, Prague based automobile exhibition Legends, Czech Truck Prix held in Most or European autocross race in Nová Paka. "We are really happy, repeating the win is always more difficult than to succeed for the first time. This achievement is a great reward as there voted both motorsport experts as well as wide public. We continuously try to move the event forward to make it interesting for competitors as well as for our visitors. Winning the Golden Wheel poll is a reward for everyone involved in the rally organization. We want to thank everyone who supported us not only in this poll, but also during the race itself. Spectators are those who every year make the unique atmosphere along the rally route," said Miloslav Regner, the Clerk of the Course Barum Czech Rally Zlín.

The Golden Wheel 2018 poll was overall won by Jan Kopecký, the Škoda Motorsport factory driver. After really successful season he became a WRC2 world champion and jury awarded him with 63 points. For the 37 years old driver it is already the eleventh Golden Wheel trophy. "In the previous season we together with my co-driver Pavel Dresler achieved everything what was possible. I wouldn't change anything," said Jan Kopecký during the prize-giving ceremony.

The 32nd edition of the Golden Wheel poll saw win retains in many categories - competitors repeated their successes in four categories out of eight overall. The jury consisted of 24 expert members and the results were influenced also by wide public, whose votes had weight of one third. People participated in the poll with almost 22.000 votes.