Vote for the Barum Czech Rally Zlín in the Golden Wheel poll!

With the end of the season there again comes the popular motorsport poll Golden Wheel. Previous year, the Barum Czech Rally Zlín won the category Motorsport event of the year and now there appears a new challenge – to retain this success again. 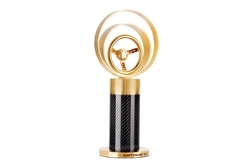 The Golden Wheel poll is the most traditional one in the Czech Republic, its tradition goes back to 1976. In recent years the Golden Wheel poll has gone through a major restructure, one of the innovations could be found in wider participation of public. According to the organizers, this year the role of public will be even more important for the results. From the view of the Barum Czech Rally Zlín the main attention goes to the category of the Motorsport event of the year where it will compete against such rivals like MotoGP in Brně, Czech Truck Prix in Most or European autocross race in Nová Paka.

The public voting was recently launched at www.zlatyvolant.cz and will be accessible until 21 January 2019. The Golden Wheel prize-giving ceremony will go on one month later, on 20 February in Prague.

"We have been delighted that in previous year people voted for the Barum rally as the best motorsport event," said Miloslav Regner, the Clerk of the Course Barum Czech Rally Zlín. "The Golden Wheel is a prestigious poll and it's an honour to succeed in it. We every year try to keep high standard of our rally so it would be interesting for drivers as well as for spectators. Few days back we renewed our contract with the FIA ERC promoter and thanks to that we can welcome the European Rally Championship in next three upcoming years. If our fans vote for us again in the Golden Wheel Poll and we retain the previous win, we would be really happy. Because success like this would be a great reward for all who participate on the Barum rally organizing."