Like in 2017 also this year the Barum Czech Rally Zlín organizers together with Červené Mravce Rally Team decided to give a Fair Play Award linked to the last edition of the popular Barum rally. 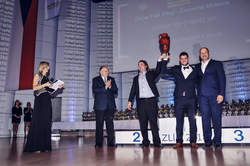 This year's story began already before the rally itself kicked off - when a crew Lukáš Frána - Pavel Odvárka unluckily crashed their Renault Clio during the shakedown stage. At that time only few hours remained to the start of the event. But thanks to friendly support from the team of Petr Krajča and Jan Houšť the crew Frána – Odvárka finally appeared on the starting ramp with a fully repaired car. Krajča and Houšť offered the crashed crew already before the rally many spares which would be potentially needed during the event and this act filled the expectations of the fair play spirit.

The one and unique 2018 Fair play cup was given to Petr Krajča and Jan Houšť from hands of Miloslav Regner, the Barum Czech Rally Zlín CoC, and Peter Hojnoš, the representative of the Červené Mravce Rally Team, during the ceremonial Czech Rally Championship gala, which took part at the beginning of November in Zlín.