In 2019 the Barum Czech Rally Zlín is going to write the 36th chapter of its relationship with the European Rally Championship. This rally belongs to the most important motorsport events in the Czech Republic as well as in the continental FIA ERC series. The 49th edition of the Zlín-based rally will be again held in summer time of August, but newly in slightly changed date – from 16th to 18th August 2019. 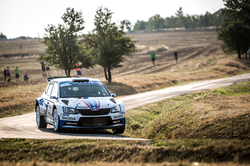 The upcoming Barum Czech Rally Zlín will be based on its time-proven layout from previous years. The Friday morning will belong to Qualification stage followed with a ceremonial start later in the afternoon and super special stage in the streets of Zlín in the evening. Saturday and Sunday will offer more than two hundreds kilometres of classical tarmac stages around the whole Zlín region. "We already work hard on the route shape of the next Barum rally. We would like to include completely new sections or at least roads, which haven't been used for some time. After elections we also need to meet new people in local governments to get known each other," said Mr. Miloslav Regner, the Clerk of the Course. "We also carefully watch the situation with African swine flu, which already influenced the rally in previous two years. Nevertheless, I believe we can prepare valuable route and stages which will satisfy both crews and spectators."

Beside the main ERC category the Barum rally will again host the junior championship which has become a prominent mark of this rally series. Like in previous year there will be announced two junior categories U27 and U28 joined by rookie training programme Junior Academy. Compared to the last year the Barum rally will close the junior championship calendar which will be hosted at five of totally eight ERC rounds. Apart from the international field the Barum rally will of course welcome participants of the Czech national rally championship and under the banner of Star Rally Historic also drivers of older cars from the 20th century. There won't be missing also many additional activities and attractions, in many of them, like in the Experience programme, people can play an active role.