For the 14th time, STAR RALLY HISTORIC (26th - 28th August 2022) will become an integral part of the Barum rally. This popular rally, which has evolved into a proper event and a solid pillar of the Czech Historics Championship, will once again be running for three days from Friday to Sunday. Spectators can look forward to a demonstration drive of Rally Legends again. 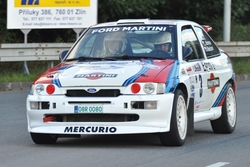 These days, special regulations have been approved and issued by the national authority. The competition will be included in the Autoclub Championship of the Czech Republic in Rally of Historic Cars 2022, it will also be run as a free international event of the Rally of Historic Cars and a demonstration drive of the Rally of Legends. Organisers from the Auto Club Barum Zlín have arranged a three-day historic rally again, and crews will appear on all stages in a similar way to the competitors in contemporary cars. Zdeněk Bělák, a former co-driver and currently an official at Czech rallies where he often appears as a sports commissioner, has become the new director of the Zlín Historics Rally.

The presentation of the competitors will start on Wednesday afternoon, when the administrative acceptance, itinerary and GPS distribution will begin at the premises of UTB Zlín on Mostní Street. The orientation drives are scheduled for two days, starting on 25 August in the morning. The service car park will be located in Zlín in the former Svit factory premises on Dvacátá Street (Cream company parking). The ceremonial start will take place on Friday 26 August at 2 pm in front of the Zlín City Hall and at 6:30 pm the engines will roar at the popular city special stage in the streets of Zlín. On Saturday, 27 August, there are three stages on the programme, called Březová, Držková and Semetín. Except the last one, the crews will complete each stage twice. The starting field will be reached after 95 sharp kilometres within the first leg.

The competition will then peaks on Sunday 28 August with five stages on three sections, with a second pass through the demanding 20-kilometre Pindula section at the very end. Before that, the crews will make two passes through the legendary Maják stage, then they will take the Bunč stage and in the morning they will try the first pass through the Pindula stage. During the second leg, the spectators will always see the historics' passes before the contemporary cars start. The first car will appear at the finish line at 2:18 p.m. The 14th Star Rally Historic 2022 covers a total distance of 484 km and includes 11 stages with a total length of 176 km. The Rally Legend demonstration run will reach the finish on Saturday evening, measuring a total of 283 km and containing 6 stages with a total length of 95 km.

Zlín organizers expect a strong starting field including foreign crews. Vlastimil Neumann in a Ford Escort RS Cosworth has won the last three years, and this year Jaroslav Vančík in a beautiful BMW M3 is also expected to be at the start.
More information available at www.czechrally.com and don't forget to follow Barum rally on the official Facebook, Instagram and Twitter accounts.