During the 50th anniversary of the Barum Czech Rally Zlín, the Star Rally Historic purposed for historic cars for the first time was expanded with Sunday leg and the overall mileage of the special stages was extended as well. The total length of the special stage was 143 kilometres, of which 74 were run on Sunday. 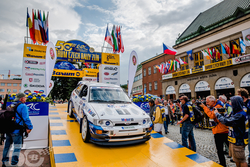 The stages Halenkovice, Biskupice and the royal 25 kilometres long Májová were waiting for the crews on Sunday, the last two mentioned sections were run twice. The first three stages of the day were dominated by Vlastimil Neuman with a Ford, who entered the second leg as the leading driver of the Star rally. Petr Jurečka in his Subaru and Miroslav Janota were chasing him, however Janota returned to the rally after Saturday's retirement and re-started the day not being classified in the overall standings. However, the yellow Opel did not bring its crew to the finish line even on Sunday, they were again stopped by a technical failure. In the overall standings, Neumann was leading ahead of Jurečka, who switched positions with third Jindřich Štolfa already after the first morning stage.

It was the pilot of the Rover 220 GTI who set the fastest time on the penultimate stage of the rally, but he took only one second from Jurečka's margin. The Subaru pilot, on the contrary, won the final Májová stage and sealed the original order of the podium top three. Vlastimil Neumann thus achieved his third triumph at the Star Rally Historic in a row, having a comfortable lead of more than two minutes at the finish.

An interesting battle also took place during the day at positions just behind the podium places. After the first leg, four crews with different types of BMW cars were lined up within no more than 15 seconds difference. The best of this group was the winner of the 2017 Star rally Stanislav Budil with the BMW 2002 TI, who gradually moved to the final fourth place, previously held by Martin Klepáč with his Peugeot 309 GTI at the beginning of the day. However Klepáč was later skipped even by Martin Knížek with a BMW 318 iS and fell down to sixth. From the original starting field of 53 crews, 31 of them finally reached the finish line in Zlín on Sunday evening.