Star Rally Historic in three days for the first time

Over the recent years, the Star Rally Historic has become an inseparable part of the Barum rally. This year, this popular rally, which has grown into a fully-fledged event and a solid pillar of the Czech Historic Rally Championship, will bring a big premiere at its thirteenth year - it will run for three days from Friday to Sunday for the first time. It also returns the location of its centre back to the city of Zlín. Spectators can look forward to the Rally Legend demonstration drive again. 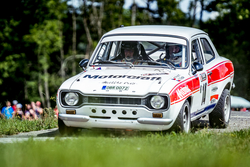 After last year's cancellation due to the coronavirus pandemic, the Barum Czech Rally Zlín will celebrate the 50th anniversary at the end of August on 27-29 August 2021. The organizers from the Auto Club Barum Zlín are preparing a number of additional events including this year's Star Rally, which will commemorate the jubilee birthday of the famous European competition. "We would like to welcome drivers who wrote the history of the Barum rally and attracted the fans in the past. We plan to organize autograph sessions and meetings with drivers in the Golden Apple shopping and entertainment centre. Star Rally Historic is an important part of the history of the Barum rally and we believe that this year's starting field will offer both interesting cars and famous names in the list of registered crews," said Miloslav Regner, the Clerk of the Course Star Rally Historic.

The competition of historic cars will take place for the first time in three days and the crews will appear in all special stages, just like modern cars in the main ERC field. The ceremonial start will take place on Friday 27 August at 3 p.m. in front of Zlín town hall, and from 7 p.m. the cars will enter the popular city special stage in the streets of Zlín. On Saturday there are scheduled four special stages, the historic cars will drive there between the passages of the main ERC field. The competition will culminate on Sunday 29 August 29 with five special stages split in three sections, when a demanding 25 km long stage is prepared as the rally's finale. The first car will appear on the finish ramp at 7.30 p.m. The Rally Legend demonstration drive will reach its finish line on Saturday evening, their route will be 213 km long and will contain 5 special stages with a total length of 68 km. The complete route of the 13th Star Rally Historic 2021 takes 528 km and contains 10 special stages with the overall length of 142 km.

Star Rally organizers believe that the competition will take place as we know it from the past - with a rich additional program for fans who will be able to enjoy the last holiday weekend on full.