Star Rally Historic again as a Czech championship round

Star Rally Historic is standing at the start line of its twelfth episode. From an additional show, which entertained people between passages of main Barum Czech Rally Zlín starting field, the event has grown up to a fully-fledged rally. Nowadays it counts to the Czech Historic Rally Championship. But it hasn't forgotten its roots and this year it will also welcome participants of Rally Legend Demonstration Drive. Which is more of a show and finish time has no place there. Rally fans along the route can again look forward to more than eighty crews with beautiful historic cars. 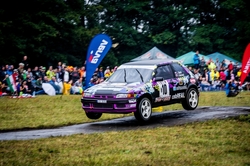 The Star Rally Historic has already settled in Zlín. Both its participants and spectators are anxiously waiting for another chapter of these historical specials. Technology in the starting field is growing thanks to a new age limit, and once again intense two-liter Group A specials of the mid-1990s are roaring through streets. This group will undoubtedly be a great attraction at this year's rally. After all, two ex-factory Ford Escort RS Cosworth cars of Vlastimil Neumann and Libor Kotrmon will appear at the start. Followed by a slightly older Sierra Cosworth driven by Jozef Béreš, Subaru Impreza 555 of Petr Jurečka and Pawel Wyxociky from Poland is coming with Toyota Celica GT Four. However, even turbocharged engines and all-wheel drive are no guarantee of success. For example, circuit driver Tomáš Enge was chasing Vlastimil Neumann with a small-volume Škoda 130 LR Group B last year. Unfortunately, the Liberec-born driver will miss this year due to healthy reasons. Another good show will be in the lower class between the ever agile Peugeot 205 GTI of Vratislav Hýbner and Martin Klepáč and fast Petr Michálek on Suzuki Swift. Well-known names like Vladimír Berger, Jan Krejča or Petr Šimurda are betting on the fast Škoda 130 LR. Their direct competition will be Lumír Vyorálek and Martin Černý both on Lada VFTS. Among the cars from the 70s, there are more delicacies. For example, BMW 2002 brought Stanislav Budil and Milan Kopka. Michal Rejchrt came with another Escort, but this time from the first generation and the same generation of Opel Ascona choose Josef Kakrda.

Almost fifty crews applied for the Star Rally Historic, and another thirty-five crews will participate in the Rally Legends demonstration ride. It is all about a fantastic show and spectacular vintage specials. The first group is traditionally represented by Bronislav Sobotka with Lada VFTS or Stanislav Bláha with Wartburg 353 W. In the second group, there is Aleš Máčala, who as usual races with a massive Mercedes Benz SLC500. And Karel Jiráko, the Nestor of Czech rally presenting for the first time his newly built Opel Ascona A. The age difference between cars is getting larger, so fans will witness on the same special stage the classic 60s emblem as well as Felicia Kit Car three decades younger.

This year, the Star Rally Historic will stick to its time-proven plan, thanks to which its background moved from the center of Zlín to Otrokovice. Crews of historic cars will find their background again at Otrokovice airfield. For fans, the advantage is that they can see both the starting field of the Barum Rally and the Star Rally Historic in one place. And the carparks will grow larger. The same background is also convenient for a few service teams that maintain racing cars competing in both competitions. Scrutineering will also take place in the Service zone in Otrokovice on Friday morning. At 2 pm, the crews will take part in the ceremonial start on a ramp in front of the Zlín Town Hall, and their adventure kicks off on the famous city circuit around 7 pm. On Saturday, there are scheduled six classic sections. SS Březová and SS Semetín have two runs, then two tests west of Otrokovice - Halenkovice and Kostelany, only take on. Saturday's portion of the tests has two service pauses. After the last SS in Semetín, the crews will go straight to the finish in the center of Zlín, where there are the formal announcement and a closed carpark. The only exception is the Rally Legend demonstration cars, which will skip the seventh special stage and will head to Zlín after passing SS 6 Březová. They will thus start the evening ceremony program, and they should arrive at the finish ramp before nine o'clock in the evening.