Star Rally Historic is now an integral part of Barum Czech Rally Zlín. In eleven years, the rally has taken an exciting journey, during which it joined the Autoclub of the Czech Rally Historic Championship 2019 and rightfully gained the status of a championship event. The last year's winner was Vlastimil Neumann and his co-driver Otto Slezák on Ford Escort RS Cosworth. This year he would like to carry on and ideally win again. 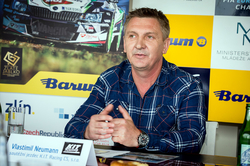 "At the Barum Rally, we start with five of our cars. We want the results to be perfect," said Vlastimil Neumann, who has been racing historic car since 2017. Last year he finished second in the category 5 of the national championship. "We lost the championship ourselves. I do not read all the annexes to the regulations, and I have omitted the premium points for historic cars, which are given for the participation of more cars in the category. We were only two points away," realized the 50-year-old rider.

Winning the national championship was not his priority. "Jindřich Štolfa won. He is a friend of mine, and he has been racing for years. We are great friends. We have known each other for over 35 years. I wish him that he deserved to win more than I did last year," he admitted. This season Neumann is on a roll. He and his co-driver Martin Hlavatý are outperforming all the Czech crews. They were the fastest ones on most of the competitions except for the April rally sprint at Kopná, where the technique betrayed them. "Over the winter, we wanted to change a couple of things that got damaged. On Kopna, we tested the car's abilities. Unfortunately, it did not work out because the engine got overheat, that's why we didn't finish. We didn't want to cause further damage, so we gave it. It was reasonable, and all the more we prepared for the next race," said Neumann.

But he dominated right on the next event Historic Vltava Rallye. "We also led the European Championship for half of the race. Behind us were even Italian boys driving Lancia cars. Unfortunately, the allocation of times changed everything, but it's part of the game. In the end, there will be a European and Czech winner. In any case, I dare say that even on the European scene we are doing a good job," said an experienced competitor at a press conference of the organizers of the Barum Rally on the premises of Tomas Bata University in Zlín.

Vlastimil Neumann has been racing in a regular rally since the 1990s. After more than twenty years he founded and devoted all his time to his team K. I. T Racing CS. As he says, it was his duty. "When the team started working well, and there were people able to take care of things, I could get back to racing. But then I noticed my birth year and decided it was time to sit behind the wheel of slightly older cars. Obviously, at fifty, I wouldn't be able to learn how to race a Škoda Fabia R5. I'm competitive, and I still want to race the best drivers. That is why a racing of historic vehicles was the best option," concluded Vlastimil Neumann during a meeting with journalists.