The organizers of Barum Czech Rally Zlín have published Supplementary Regulations for the race of vintage cars called Star Rally Historic. This 12th edition taking place from 16th to 17th August 2019, similarly, as in previous years, it features a starting field that is divided into the competing group, participating in the Autoclub of the Czech Rally Historic Championship 2019 and the free demonstration drive called Rally Legends. The crews are getting ready for almost 90 hot kilometers of special stages, while the "legends" will not run the final SS Semetín in Saturday's program. 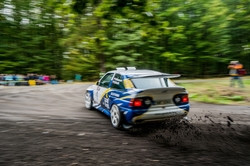 The rally of historic cars is becoming increasingly popular not only among fans but also among racing crews. More than fifty contestants are expected to enroll in the competition of this year's Star Rally Historic and over thirty cars in the Rally Legend. This year's edition is based on the last year's scheme when the competition left the center of Zlín for the first time and found the background in the Otrokovice area of ZLIN AIRCRAFT, where the service zone is again located. The crew presentation and itinerary issue will start on Wednesday 14th August in the afternoon, and for Thursday is scheduled reconnaissance on special stages. Scrutineering will take place in the Service zone on Friday 16th August from 7:30 am to 11 am. The ceremonial start will take place at 2 pm on the square in front of the Town Hall in Zlín. Historic cars will roar after 7 pm at the Super Special Stage in the streets of the regional city, where thousands of spectators will get a taste of rally before the start of the best racing specials.

On Saturday, 17th August Star Rally Historic crews will take part in the classic stages of Březová, Semetín, Halenkovice, and Kostelany. At the very end of the competition, there is scheduled a second passage on SS Březová and SS Semetín. On Saturday there will be three service breaks; after the final stage in Vsetín, the competitors will go directly to the center of Zlín and they are expected to cross the official finish line after 9 pm in front of the Town Hall. Altogether, it measures 380 km with seven special stages on five sections measuring up to almost 90 km.

Vlastimil Neumann on Ford Escort RS Cosworth is the defending champion and he also dominates the Czech Championship after five events out of eight. Supplementary Regulations for Star Rally Historic can be downloaded from www.czechrally.com. The registration has been launched and the deadline is set on Sunday, 28th July. Fans of historic cars can look forward to a good starting field, which will also feature foreign crews.