Star Rally Historic, an additional Barum Czech Rally Zlín race for historic rally cars, has gone through very demanding edition. Rainy weather made the rally route an exceptional proof of drivers' skills. At the beginning, former Formula 1 driver Tomáš Enge with his Škoda 130 LR took the lead, however he lost it later as Vlastimil Neumann used advantages of his ex-factory Ford Escort RS Cosworth on wet and dirty stages. 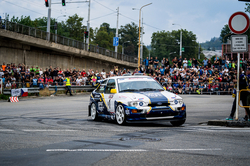 Neumann went to the overall lead after special stage Kudlovice, which contained long and fast roads, where full power of Ford's engine could be used, as well gravel sections, where weaker cars with just one driven axle were not so competitive. After this stage Enge not only lost the first place, his gap suddenly grew up to more than 46 seconds. The experienced circuit driver tried to regain the leading position as he won technical stages Semetín and Rajnochovice, but in the finish there still remained the gap of 18,8 seconds.

The overall third place was reached by Jan Krejča. He started the rally fith fifth fastest time on the Friday's city super special stage, in the Saturday morning he moved up to fourth and when Jozef Béreš (Mazda 323 4WD Turbo) retired, Krejča got to the third place, where he remained until the rally finish. Great skills showed an ex-factory Škoda driver Jindřich Štolfa, who with small Rover Metro GTi beat Petr Jurečka with Subaru Impreza 555.

Despite of demanding weather and route conditions the rally was run in its full length, which was record-breaking this year - the overall stage length was 97,8 km. However, eight special stages were really tough for the whole starting field – from 48 crews entered to the time-measured part of the rally only 27 reached the finish line. The rally was counted as a round of the Czech historic rally championship, as a free international event and Rally Legend demonstration drive.