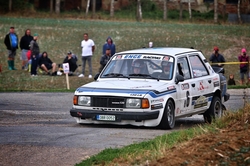 Tomáš Enge has already won the city special stage on Friday. On Saturday morning Vlastimil Neumann got in front of him but Enge got back first place on the third special stage and kept it.

Star Rally Historic began in 2008 as a sort of an entertaining show but soon it gained so many fans that it became a rally of its own. And two years ago it was integrated into the Czech historic rally championship. Some vehicles are only participating in the demonstration drive, which is just a pleasure for any lover of historic cars. The XI. Star Rally Historic made major changes this year. There are eight special stages and the total length is longest ever. Almost one hundred kilometres.

The rally's final stages Kudlovice, Březová, Semetín and Rajnochovice are scheduled after Service Park. After the last stage the crews are heading to Zlín for the ceremony at 9 p.m.