In 2018 the Star Rally Historic is about to open the second decade of its history. The eleventh edition of this event for historic rally cars will be held as a championship round of the Czech national historic rally series, it will be run as a free international event at once and what is more, the rally will not forget its roots, from which it has grown over the years – there will go on the Rally Legend demonstration drive. Fans along the rally route can look forward to almost ninety crews with various rally cars. And competitors can expect demanding special stages with record-breaking overall length, which this year almost attacks magic border of 100 kilometres. 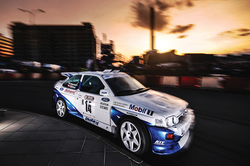 Historic rally competitions are gradually gaining more attention from crews and fans alike. Partially, it is because cars that could have been recently seen on the roads are entering into some of the categories. It is pleasing to see people investing in vehicles and not only into cars from the late 80s but also into racing specials from factory teams and them taking them for "a spin". Therefore, two strong cars Ford Escort RS Cosworth with a quite rich history can be seen in Zlín. One will be driven by Vlastimil Neumann who has already showed his fine skills and is one of this year's favourites. But it will not be easy. His rivals are last year's winner Stanislav Budil on BMW 2002 TI, then Tomáš Enge, Jan Krejča, and Vladimír Berger - all of them are very fast on their cars Škoda 130 LR. Then Jindřich Štolfa on Rover Metro GTI, who won Rally Historic Bohemia, and Petr Hustý with a very powerful Mercedes-Benz 190 E.

The Czech drivers should also be aware of their opponents from all around Europe. Even though they are not competing in the Czech National Historic Rally Championship, finishing on the top has its value and prestige. The arsenal of historic cars coming to Zlín is spectacular. Grzegorz Olchawsky is bringing Audi Quattro A2, his fellow Polish countryman Marek Suder is driving a replica of Ford Sierra Cosworth of a Polish Champion Mark Bublewicz. Porsche 911 driven by Albert Bellschan von Mildenburg from Austria period represents the 70s. Hans Gustavsson is coming too with Toyota Starlet, he used to compete in Barum Rally and the past couple years is focusing on historic rally events.

Over fifty crews have signed for Star Rally Historic and more than thirty vehicles will be seen throughout exhibition ride called Rally Legend. The fans can admire wonderful pieces like Lancia Delta HF Integrale, owned by Franco Busi, then it is Mercedes-Benz SLC 500 driven by Aleš Máčal. Bronislav Sobotka always makes it interesting with Lada VFTS just like Stanislav Bláha on Wartburg 353 W.

Star Rally Historic changed significantly its logistic and itinerary. The background will now be in Otrokovice provided by the company ZLIN AIRCRAFT. The organizers hope that this step will further increase this event's popularity and bring it together with FIA ERC teams. Scrutineering will now take place in a new Service Park on Friday morning. At 2 p.m. there is a Ceremonial Start in front of the Zlín City Hall and in the evening the very anticipating Spectator's Super Special in the streets of Zlín. For Saturday and Sunday, there is scheduled a historically highest number of eight stages. On Saturday it is Super Special in Kudlovice and others are SS Březová, Semetín and Rajnochovice, all three of them for two rounds. There are two service sections and after the last stage Rajnochovice all crews are coming to Zlín for the Final Ceremony in front of the Zlín City Hall after 9 p.m.