Stanislav Budil managed to improve his last year's result and won the jubilee X. Star Rally Historic. On the second place finished French Paul Chieusse, who won this rally twice in the past, and the last person on the podium was Kmail Makuchowski from Poland whose Honda Civic VTi is one of the relatively newest cars. 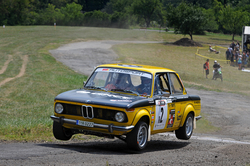 Czech Jan Krejča was in the lead in mid-rally but he buried his chances on SS Březová along with other drivers many of them were driving Škoda cars like Břetislav Enge, although he was going down way before. Budil took the lead and when then third and fast Martin Černý, Lada VFTS, retired, the current podium looked very different. Polish Makuchowski made the best of the situation on Březová, moved up to the third place and then none of the top three riders allowed anybody to get between them. On the last stage, there was a fight between Petr Jurečka, Subaru Impreza 555, and Petr Michálek, Suzuki Swift GTi, who overtook Jurečka and finished fourth.

There were 49 crews on the start of Star Rally Historic, yet only 28 managed to reach the finish line of the second year event running in Czech Historic Car Rally Championship.