The winner of the 7th Star Rally Historic is Paul Chieusse

The absolute winner of the 7th Star Rally Historic was the French crew Paul Chieusse, Patrick Chiappe with their car Renault 5 Turbo. Czech drivers Lumír Vyorálek and Radek Olejník with Lada VFTS (lost 1:36.2) were second, followed by Italian duo Albano Frassinetti, Fabio Villa on Ford Escort RS Cosworth (+ 2:15.5). The Italian crew occupied the second position before the last stage, but in the end they lost it. 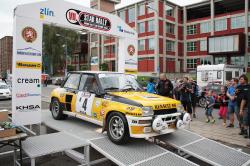 Star Rally Historic began by the Special Super Stage. The first stage was ruled by the two-time winner Jaroslav Vančík. The Czech driver was hoping to win again after his triumphs in 2012 and 2013, but right from the start of Saturday's stage Lubomír Tenkl was thwarting his plans. Just like last year they were fighting for the first position. Their contest was unravelled during the SS Troják, where Vančík was forced to retire after suffering a puncture. At that time Tenkl was leading by margin of 2 minutes, but that was not enough. At the beginning of the 5th stage he went off and even though he finished this stage, he rather decided to drop out to prevent further damage. The French Paul Chieusse took the opportunity and was the first to cross the finish line.

Rally Legend was once again part of Star Rally Historic as an unclassified category. Its biggest star was undoubtedly Franco Ceccato, who participated in the Barum Rally in the early 80's. And he came back after more than thirty years with the identical car Fiat 131 Abarth. His team was completed by his son Michele who brought a slightly more modern BMW M3. The competition offered other attractions as well. For example the Slovakian showman Jozef Béreš jr. and his side to side drive in Audi Sport Quattro S1 or a view on a legendary Lancia 037 Rally gr. B driven by Italian Giuseppe Volta.

The crews went through the same first six stages as the competitors of the Barum Czech Rally Zlín. It took the winner an hour, two minutes and 32, 9 seconds to finish the 84, 76 kilometre long competition.

1st place: Paul Chieusse (FRA, Renault 5 Turbo, st. no. H4):
'It was difficult to tune up our car as it is not built for bumpy and glassy asphalt. In order to prevent major mistakes, we had to go carefully. It is an exceptionally beautiful rally with wonderful atmosphere and we give a big thank you to the organizers. We'll come back next year and we'll try to retain the title.

2nd place: Lumír Vyorálek (CZE, Lada VFTS, st. no. H8):
'This year I competed with a less contemporary car and it seemed to me that people weren't that interested in them. I managed to pick the right tyres and the chassis took more hits than during the whole season. It was very hard and the car will be checked thoroughly.

3rd place: Albano Frassineti (ITA, Ford Escort RS Cosworth, st. no. H2):
'It is my first time here and our result was a complete surprise to me. There is a lot of competition and the roads aren't in good condition. We had a lot of troubles during the last two stages. We're glad it's over as our car wouldn't make it through another stage. Next year we'll come back.'

Giuseppe Volta (ITA, Lancia 037 Rally, st. no. L25):
'It was better than the last year. People here truly appreciate the rally and the Italian cars. I'm sixty seven and I participated in an international rally but you'll never see that many people anywhere else. So I made donuts for the fans.'