Star Rally Historic was won Jaroslav Vančík (Lada VFTS) who beat Lubomír Tenkl (BMW M3) after six special stages by nearly 22 seconds. The third place was taken by Jiří Navrátil (Ford Sierra RS Cosworth) who got a ten second penalty which cost him the second place as he only lost 1.6 second to Tenkl. 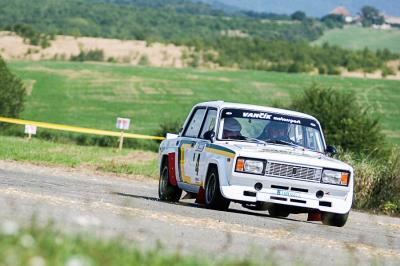 After four special stages Vančík was losing 14 seconds to Tenkl which he erased thanks to a good finish. He was announced as a winner even last year but then it was not the time that would decide but the votes of a professional jury of important rally personalities. "Except for the brakes the car worked well. There were very many crises but I'm satisfied. The routes were difficult but beautiful. That's perhaps why it suited us," said the winner in the finish. He had a critical moment sloping down to Hošťálková. "It was at our limit, we went a bit faster than we should have but that's part of it," smiled Jaroslav Vančík.

Just like other drivers he appreciated the organisers' decision to keep time for historic cars too. "The competitors said that we made them happy that they could compete at the Barum Rally stages and enjoy the unique atmosphere at the stages. We'll try to repeat this model in the up-coming years too," said Zdeněk Bělák, one of the organisers of the Star Rally Historic.