Green rally has successfully celebrated its second year. It is a race only designated for electric and hybrid vehicles that combines regularity drive and special tasks focused on drivers' skills and it is accompanied by various cultural and entertaining features in Luhačovice Spa. The crews Zdeněk Trčala – David Rumpík with their brad-new Jaguar I-Pace absolutely dominated Green rally. 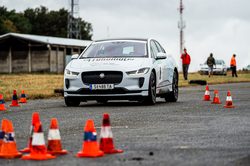 Their two-day competition begun in the centre of Zlín in the afternoon followed by their first test on special stage Březová where more than twenty hybrid and electric vehicles got their first taste of regularity drive. In the evening the group went to airport Bílá Hlína where there was prepared a test of their driving skills.

A very early start of Sunday's portion of stages begun on SS Maják then SS Březůvky and SS Biskupice. Then the crews enjoyed a bit of rest while visiting Luhačovice Spa, the famous Jurkovič house. After a very lovely lunch hotel Alexandria the crews went through the second loops on SS Biskupice and Březůvky and the final task was in Zlín-Louky on BMW Synot auto premises. The ramp in Zlín hosted all the competing crews and their cars one hour before the winners of Barum rally.

And what about the race itself? From start till finish with the lowest penalty points the crews Zdeněk Trčala and Dabid Rumpík on Jaguar I-Pace hold the first position simultaneously winning the electric vehicles category. The second place took Michal Sýkora and Martin Hrubý on Hyundai Ioniq, who won among hybrids. And the last place on the podium went to the last year's winners Lukáš Hataš and Tereza Němcová on Tesla Model X 90D.