Zlín Bikes with attractions for everybody

Zlín Bikes is for the second time happening at the occasion of Barum Czech Rally Zlín and follows the track of SSS in the centre of Zlín. This is the first of many attractive events of Friday 24th August. 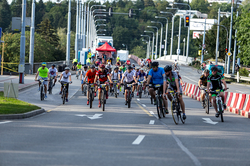 Zlín Bikes is a result of a cooperation between the organisers of Barum rally and the Statutory City Zlín. Zlín is a huge supporter of bikes being used in cities, throughout the year Zlín City organises public rides and adjust the infrastructure for bikes. Therefore this event is a logical conclusion of city support of both bikes and Barum rally.

The cyclists will have at their disposal the whole city circuit on Friday afternoon. "We changed the rules this year, cyclists are not limited by the number of laps, it is only up to them how many times they want to go," said Silvie Hlavičková, director of Zlín Bikes. "Also the choice of bike is up to them, they can use electric bikes, kick scooter, velocipede and tandems." And this is related to the selection of prizes. One prize goes to the team with the most members signed for Zlín Bikes, the other two are for the most original bicycle and the most original dress. "This year we are celebrating 100 years since the establishment of Czechoslovakia so any period bikes and clothes should me it more interesting. Last year we saw couple of very well dressed cyclists and we're ready to award the most fascinating one this year too," said Hlavičková.

The background of Zlín Bikes is in a Park surrounding Zlín Castle and check-in for the event and possible post-deadline registration starts at noon and closes at 3:45 p.m. Start of Zlín Bikes is at 4:45 p.m. on Bartošova Street and all cyclists should finish by 5:15 p.m. At half past five, the city circuit has to be clear for the rally to start.

The area around the background of Zlín Bikes is going to be packed with many entertaining features for kids and adults alike like pirate boats with a sledge, shooting range, simulators, slot cars and human size table football. All this stars at noon and is co-organised by Agency Devět měsíců (Nine months). The smallest kids can colour, take quizzes or try a safe drive a miniature traffic model BESIP and get to know the traffic signs. So there is plenty to do even for those who do not take a bike with them to Zlín.

And rally fans can admire their favourite motorsport figures up close. "Before the start of Zlín Bikes, fans can get a signature of the competing crews in Star Rally Historic in the Park from 3:30 to 4:00 p.m. Many important figures of motorsport are coming like a former Formula 1 driver Tomáš Enge, than Vladimír Berger, Stanislav Budil, who won Star Rally last year and Czech drivers Petr Krajča and Martin Černý. What's more, Krajča's co-driver Jan Houšť will take part in the Zlín Bikes ride," said Silvie Hlavičková. All the crews and their cars will be seen in the Park surrounding Zlín Castle and fans can get a close look at those magnificent vehicles before the rally itself.

You can register on a website www.zlinska-kola.cz. Deadline for application is on Tuesday 21st August. "Registration is also possible after this date and on the day of the event, but these cyclists won't be listed in the official list," said Hlavičková. For participating in the team category it is necessary to apply in advance.