Statutory City of Zlín and the organisers of Barum Czech Rally Zlín agreed to follow up on the successful premiere of a cycling event called Zlín Bikes which is for anyone who likes to bike. This cycling trip for this year named TOUR DE BARUM RALLY is on Friday 24th August 2018 in the centre of Zlín at 4:45 p.m. and follows the track of city circuit SSS. 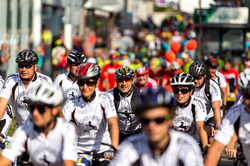 "Zlín Bikes is not about your finishing time, but about fun. Some gifts and prizes will also be prepared! Anyone can come and ride on any kind of bike, including a velocipede. Even an electric bike, tandems or a kick scooter are allowed. Last year there were over five hundred participants and we would like to go higher," Silvie Hlavičková said, the director of the race.

Who can participate? The race has three categories: men, women and children from 12 to 18 years old. There are no fees and also teams can register. Online registration form can be found on a website www.zlinska-kola.cz, before the race it is required to check-in at 12 to 3:45 p.m. in Svoboda Park. If the capacity is not full, it is possible to register in a check-in before the race. The limit is set on 800 cyclists. The prizes will be in three categories: the most original dress at the occasion of 100 years since the establishment of Czechoslovakia, the most original bike and the team with most members. "The background for participating cyclists is in Svoboda Park near the Zlín Castle. There will be a registration and check-in of the already registered cyclists. Moreover, cyclists can leave their bikes there in a secured area before the race itself. Refreshments, changing tent and toilets will be there too. Cyclists can also look forward to many entertaining shows not only for kids and they are scheduled throughout all Friday," Hlavičková said. This year cyclists will not be limited by the number of laps but by the time they spent on a track. Limit is set at 5:15 p.m. as the latest time to go for the last lap, while all the cyclists should leave the track by 5:30 p.m.

The track of city circuit is mostly located in the former Bata shoemaking company, than the track goes by the bus station and the start and finish are on Bartošova Street. As for the profile of the track, there is almost no hill, just one easy climb that even a child can do. Last year there were 512 cyclists including some famous names like Josef Zimovčák, a legendary cyclist on a velocipede, rally drivers Tomáš Kostka, Roman Kresta, Jan Černý and also Libor Láznička, Managing Director of Continental Barum s.r.o. and Martin Hosták, General Manager of Zlín hockey club.