On Friday 25 August 2017 cyclists participating in Zlín bikes will try out for the first time the city circuit. Before Bugatti cars and historic vehicles take over Zlín, cyclist will have their chance to wow the crowds on the Spectators' Super Special Stage on Friday afternoon. The event called Zlín bikes is simply for everybody and its organiser is statutory city of Zlín and it is realised by Barum Czech Rally Zlín. 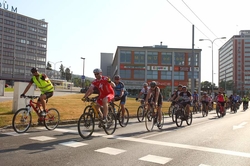 Zlín bikes is about having fun and no matter your finish time, presents will be waiting in the end! The most inventive and imaginative clothing and bicycles and the team comprising of the most members will be rewarded. You can choose whatever kind of bike you want, it can be a racing bicycle, mountain, velocipede and even a scooter. Some celebrities are expected to bike too. 'Local Hockey players are joining this 'bike rally' lead by a general manager Martin Hosták, former reporter and hockey expert of Czech television. We would like to lure other local athletes, namely the very successful football team. As far as rally drivers are concerned, at the same the ceremonial start will be taking place, however, some top drivers might make an appearance. Also some representatives of the city of Zlín and established companies situated in Zlín would participate too,' Silvie Hlavičková said, director of Zlín bikes.

You can sign online on web page www.zlinska-kola.cz. There are three categories – men, women (both riding 3 rounds) and kids age 12 to 18 (1 round). In case the capacity is not full, you can also sign that day in the park Svoboda near Zlín castle, where is the registration before the race. Deadline for online application is on Friday at 1 p.m., the registration is at 3:30 p.m. 'We are sure that Zlín bikes will attract not only general public, but also companies and sport clubs and schools. We are expecting hundreds of cyclists and the ideal number is also our limit, about 500 cyclists,' the director of Zlín bikes said.

The circuit is right in the middle of the city and passing through the former Bata's company compound. From the point of view of the cyclist, the circuit is without any demanding hill, just some easy rise that even a child can deal with. 'The track is mostly flat but quite technical because cyclists will follow the same circuit as rally drivers including all the speed bumps, difficult turns and U–turns near the railway station,' Silvie Hlavičková added. Start of Zlín bikes is scheduled at 4:30 p.m. Registration of cyclists begins at noon and the race should end by 5:15 p.m.